This is the second edition of the informal summit between Modi and Xi. 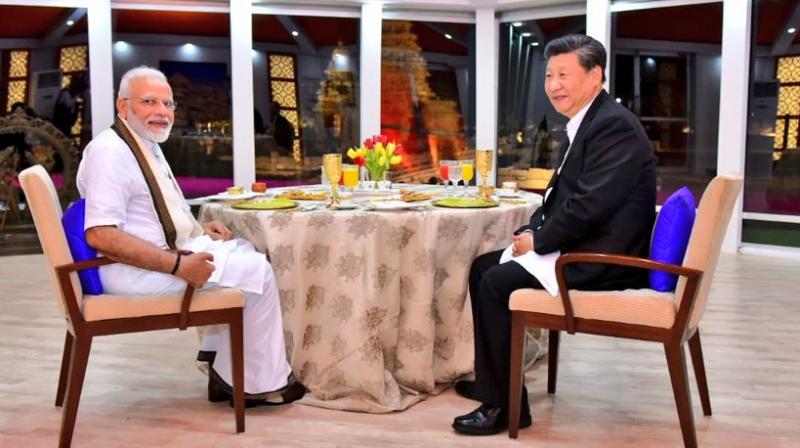 In a tweet following the dinner, Modi said he was delighted to spend time with Xi. (Photo: Twitter)

Mamallapuram: Belying the recent acrimony over the Kashmir issue, Prime Minister Narendra Modi and Chinese President Xi Jinping held a two-and-half-hour "open and cordial" one-on-one discussion over dinner at this bustling temple town on Friday, vowing to jointly combat terrorism and radicalisation, and signalling a recalibration of bilateral ties.

The meeting at the magnificent Shore temple complex under a sea-facing colourful tent in this coastal town continued well beyond the scheduled time as both the leaders, helped by two interpreters, touched upon a range of issues, including trade deficit, over sumptuous local delicacies, officials said.

"The discussion stressed over 150 minutes and it was well beyond the planned time for conversation. The discussions were very open and cordial. This was quality time that the two leaders spent together one-on-one," Foreign Secretary Vijay Gokhale said in a late evening press conference.

Xi arrived in Chennai on a nearly 24-hour visit to hold the second informal summit with Modi at a time the ties between the two Asian giants came under strain over India's decision to withdraw special status of Jammu and Kashmir. Gokhale said both the sides vowed to work together so that radicalisation and terrorism do not affect the multi-cultural, multi-ethnic and multi-religious societies of the two nations.

He said the two leaders also deliberated on trade and economic issues with a focus on identifying new areas for investment and enhancing trade volume and value of two-way trade. The issue of trade deficit and trade imbalance was also discussed, the foreign secretary said.

External Affairs Ministry Spokesperson Raveesh Kumar described the engagement between Modi and Xi on the first day of the informal summit as "highly productive". There was no official word on whether Modi and Xi discussed the Kashmir issue.

In a tweet following the dinner, Modi said he was delighted to spend time with Xi. "Mamallapuram is one of the most beautiful places in India, full of vibrancy. It is linked to commerce, spirituality and is now a popular tourism centre. I am delighted that President Xi Jinping and I are spending time in this scenic place, which is also a @UNESCO heritage site," he said.

In the late afternoon, Modi and Xi sipped coconut water and engaged in casual interaction in a serene setting in the backdrop of 7th century rock-cut chariots of Pancha Ratha overlooking the Bay of Bengal. Modi, dressed in a Tamil attire of Veshti (Dhoti), white shirt and an 'angavastram', took Xi for a guided tour of the famous world heritage sites of Arjuna's Penance, Krishna's Butterball, the Pancha Ratha and Shore temple in this ancient temple town, kicking off the second informal summit between the two leaders.

"The free flowing nature of the informal summit at the UNESCO world heritage site will continue and deepen contacts at the highest level and guide the future trajectory of India-China relationship," the MEA spokesperson tweeted. Xi's visit to India comes two days after he held talks with Pakistan Prime Minister Imran Khan in Beijing. After the talks, a joint statement said China is paying "close attention" to the situation in Kashmir and that the issue should be properly and peacefully resolved based on the UN Charter.

The comments evoked sharp reaction from New Delhi. Shortly after Xi's aircraft touched down in Chennai, government sources said the two leaders are expected to issue some directions at the end of the summit on Saturday as they did after the first edition of new format of engagement in Chinese city of Wuhan last year. Officials on both the sides said the focus of the Modi-Xi summit would be to move forward and chart a new pathway of development notwithstanding sharp differences between the two countries over several contentious issues.

In the footage beamed by public broadcaster Doordarshan of the two leaders visiting the magnificent monuments, Modi was seen warmly explaining to the Chinese leader the historical significance of the monuments with the dazzling setting sun casting a soft glow over the iconic site.

Xi, wearing a white shirt and a black trouser, was seen showing keen interests in the famous caves and stone sculptures in the heritage site in this coastal town which had historical links with China's Fujian province. Modi and Xi, assisted by one translator from each side, sat down for around 15 minutes at Pancha Ratha complex, an example of monolithic Indian rock-cut architecture, and engaged in casual talks while sipping coconut water – images reflecting warmth in personal chemistry between the two leaders of two emerging economies. From Pancha Ratha, the two leaders visited the beautifully lit-up Shore temple - a symbol of cultural heritage of the Pallava dynasty.

After spending some time together, Modi and Xi were joined by top delegates of both sides and all of them witnessed a cultural programme presented by Kalakshetra society. After the event, Modi hosted Xi for a private dinner at the Shore temple complex which was beautifully decorated with lights and flowers. Eight delegates from each side were also invited for the dinner and they sat in tables little away from Xi and Modi's. Delicately selected authentic Tamil cuisines, including vegetarian and non-vegetarian recipes, were served in the dinner. At the site of Krishna's butterball, a gigantic granite boulder sitting firmly on the slope of a hillock, Modi held aloof Xi's hands, reflecting warmth in their personal chemistry.

"Standing together and tall!," said Kumar in a Twitter post. Earlier, Xi arrived in Chennai to a red carpet welcome for his second informal summit with Modi amid a realisation a lot is riding on the bilateral ties strained over hardline approach on the Kashmir issue by both sides. Tamil Nadu Governor Banwarilal Purohit and Chief Minister E K Palaniswami and Deputy Chief Minister O Panneerselvam and Indian Ambassador to China Vikram Misri welcomed the Chinese leader at the Chennai airport on his nearly 24-hour visit.

Shortly after Xi's aircraft touched down in Chennai, government sources said the two leaders are expected to issue some directions at the end of the summit on Saturday as they did after the first edition of new format of engagement in Chinese city of Wuhan last year.

"President Xi Jinping arrived in Chennai to a warm and colourful welcome for the 2nd Informal Summit with PM @narendramodi. Taking off from the #WuhanSpirit, the #ChennaiSpirit will continue to chart the future course of India-China partnership," the MEA spokesperson tweeted. The two leaders will have around six hours of one-on-one free-wheeling talks, officials said. On Saturday morning, Modi and Xi will have a comprehensive one-on-one meeting to be followed by delegation level talks. Both sides will then issue separate statements on outcome of the summit. "Both sides know that a lot is riding on the relationship and this is reflected in the summit being held on schedule despite speculations of its postponement in recent weeks," a senior official on condition of anonymity said.

Ahead of the two-day summit, Chinese Ambassador to India Sun Weidong on Thursday told PTI that a "new set of consensus", including "guiding principles" on giving a new direction to the bilateral ties, are expected from engagement. Officials on both the sides said the focus of the Modi-Xi summit would be to insulate the bilateral trade and development cooperation from differences on Kashmir and vexed boundary issue. They said ways to bolster counter-terror cooperation, trade and enhancing cooperation between militaries of the two countries along the 3,500 km border will be key focus of the talks.

This is the second edition of the informal summit between Modi and Xi. The first informal between the two leaders was held in picturesque Chinese lake city of Wuhan in April 2018, months after a 73-day face off between the armies of the two countries in Doklam tri-juction raised fears of a war between the two Asian giants. Strategic affairs expert Ambassador Ashok Kantha said the focus of the summit on Friday and Saturday would be to move beyond contentious issues and not allow the Kashmir issue to adversely impact overall ties. Mamallapuram, a town with strong trade linkages with China's Fujian province, has been spruced up and brought under an unprecedented security cover - in the process inconveniencing local people as well as tourists.