Modi, who reached Mamallapuram ahead of Xi by a chopper, received the Chinese leader at Arjuna's penance monument. 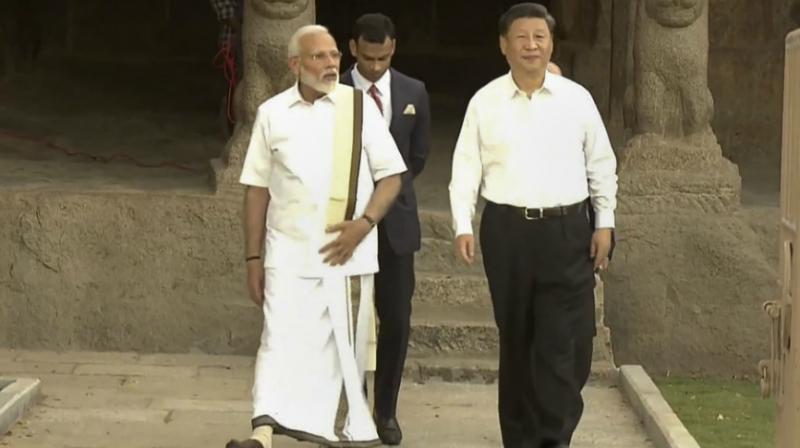 Modi, who reached Mamallapuram ahead of Xi by a chopper, received the Chinese leader at Arjuna's penance monument.

Attired in a striking Tamil traditional 'karai veshti' (dhoti with a border in green), angavastram (a shawl), and a half sleeve white shirt, the Prime Minister shook hands with Xi as the two leaders exchanged pleasantries.

"Let the world know the culture of Tamils," he said in his twitter handle.

"Respecting the Culture and Traditions of the Land He visits comes naturally to PM @narendramodi. He is seen here comfortably moving around in the traditional attire of Tamil Makkal (meaning people)."

Later, as he conversed with his Chinese counterpart at the Five Rathas monument, the Prime Minister offered a tender coconut to the visiting foreign dignitary and the two leaders relished the drink, considered good for health.

Earlier, Xi was treated to Tamil cultural performances by folk dancers and Bharatanatyam artistes while scores of children greeted him by waving Indian and Chinese flags as he arrived here and later drove to seaside resort town of Mamallapuram on Friday.

About 500 Tamil folk artistes rendered performances, including "tappattam," and "poi kal kuthirai" while a group of colourfully dressed women presented a Bharatanatyam programme to the accompaniment of 'thavil' and 'nadaswaram' (traditional percussion and wind instruments respectively) music.

A smiling Xi waved at the artistes as he paused briefly before moving on slowly.

Temple priests with traditional honours greeted him before he boarded his car.