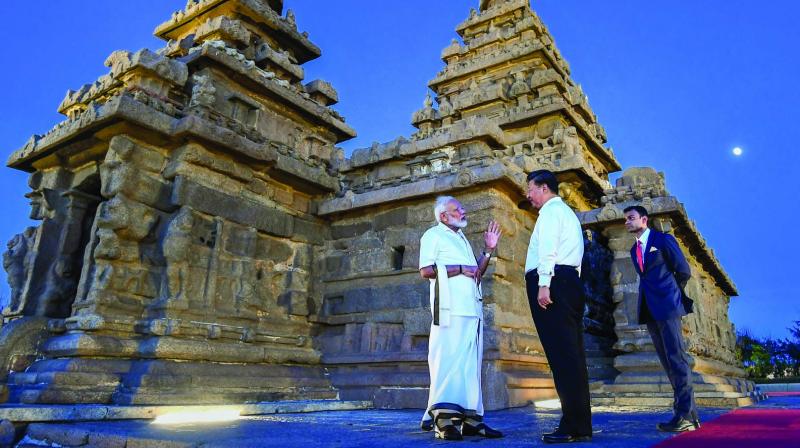 Chennai: It’s become routine now that the anti-saffron brigade in Tamil Nadu trigger the #GoBackModi hashtag every time the Prime Minister lands in the state and Friday was no exception. There was an ‘interesting’ add-on this time though; the Tamil Twitter also trended this hashtag in Mandarin to catch the Chinese eye watching developments relating to President Xi Jinping’s informal summit with PM Modi at Mamallapuram.

As of 7 pm Friday, the Mandarin hashtag figured in over 32,000 tweets, while 207K (2.07 lakh) tweets figured in the #GoBackModi handle and 43,000 mentions for #TNWelcomes_XiJinping. A few poked fun at the PM wearing a veshti, which they concluded was an act of deceit rather than a gesture to truly identify himself with the Tamil people.

“…I checked with my Chinese colleague. The words #???? actually means Back to Modi”, tweeted Karthikk @karthikk_h.

“Sad to see #GoBackModi trending. The PM is coming to TN as PM of India for a diplomatic summit. Political armies must stop using social media for narrow agendas. Agree?” tweeted TV journalist and author Rajdeep Sardesai, @sardesairajdeep. And he promptly got slammed by the anti-saffron twitterati.

Reports also popped up here and there alleging that the #GoBackModi trending has the backing of “Pakistan-based elements”.

The saffron brigade too got active on twitter to counter the hate campaign against their leader and their #TNWelcomesModi also trended well with about 45,000 tweets by early evening. At least seven hashtags related to the Modi-Xi summit were trending in the top-20 list by this time—such as #MamallapuramSummit,  #TNWelcomesModi, #TNWelcomes_XiJinping, #GoBackModi and #GoBackSadistModi.

#GoBackModi had first hit the social media in April 12, 2018 when the PM came to inaugurate the Defence Expo and became a sensation of sorts globally, particularly among the Tamil Diaspora. Since then, it became a fad among the Tamil twitterati of the anti-saffron class to trend whatever is opposed to Modi during his trips to Tamil Nadu. The last time this happened was when the PM was in Chennai on September 30 for the IIT Convocation. The hate campaigners meant to express the Tamils’ anger at the PM for allegedly ignoring their interests.

Perhaps the ‘Go Back Modi’ slogans, placards and black balloons influenced the PMO decision to fly Modi by a helicopter from the Chennai airport to his hotel at Kovalam, from where Mahabalipuram is just 10 minutes away. That would deny the hate-campaigners yet another chance to embarrass the PM. Ideally, he should have received President Xi at the airport and taken the road with the guest so as to present a picture of bonhomie at this critical juncture of Indo-China relations. Many on social media pointed out that while Xi travelled by his car, PM Modi had to take the chopper to avoid the ‘hostile’ Chennai roads and that created a poor impression, particularly among the Chinese guests.

Some on the #GoBackModi hashtag declared support for Xi coming but not the Indian PM.

And the Tamil Twitter users were harsh on those who pleaded it was unwise and improper to ask the PM to “go back” when he has come to hold crucial talks with a foreign leader. One of them who landed in the firing line was actor Khushbu who tweeted saying, “…my personal dislike towards my PM can be set aside to show the Chinese Premier that #Modi ji is way ahead of him”. And @khushsundar got hugely mauled for that.