India   All India  12 Oct 2019  Why Xi Jinping skipped the chopper ride to Mamallapuram
India, All India

Why Xi Jinping skipped the chopper ride to Mamallapuram

Chinese leaders, almost as a rule, don’t use helicopters, the foreign ministry officials in Beijing said. 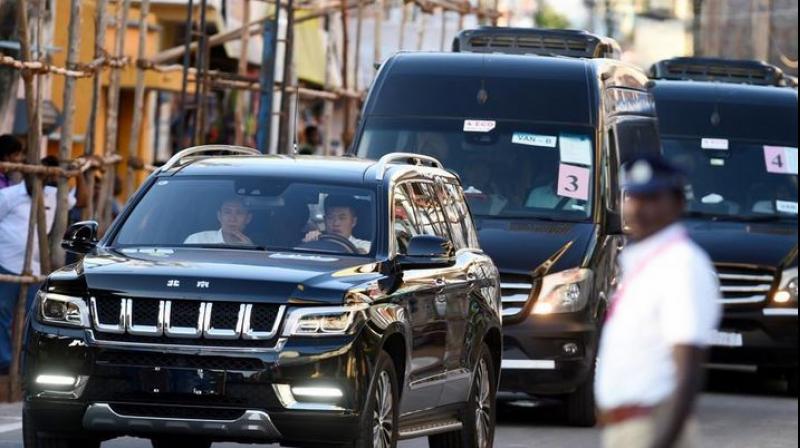 The “Hongqi” is a luxury Chinese car used by leaders of the ruling Communist Party of China (CPC) from the time of its founder Mao Zedong. (Photo: PTI)

Mamallapuram: Visiting Chennai for his second informal summit with Prime Minister Narendra Modi on Friday, Chinese President Xi Jinping has opted to travel to tourist town Mamallapuram by road instead of a helicopter as Chinese leaders, as matter of policy, shun travel by choppers.

While Modi, who landed in Chennai earlier, flew to Mamallapuram by helicopter, Xi covered the 57 km journey to Mamallapuram from Chennai, where he is staying in a hotel, by road travelling in a specially flown in “Hongqi” limousine.

The “Hongqi” is a luxury Chinese car used by leaders of the ruling Communist Party of China (CPC) from the time of its founder Mao Zedong. In Chinese, “hongqi” means the red flag.

After the dialogue with Modi, Xi, 66, and his entourage will go a sightseeing tour, and then leave for Chennai at night.

Chinese leaders, almost as a rule, don’t use helicopters, the foreign ministry officials in Beijing said.

“Chinese leaders travel by planes and cars and don’t use helicopters,” they said, when asked why the president chose a long car journey over a chopper ride during his India visit.

Even when attending multilateral meetings, like the G20, Xi shunned the use of helicopters, the officials said.

Xi, who is now the most powerful leader in China after Mao, heading the CPC, the military and the presidency with a prospect of staying in power for life after last year’s constitutional amendment removing the two term rule for presidency, had introduced the practice of using the “Hongqi”, similar to the US president travelling in a specialised Cadillac vehicle named “The Beast”.

The first time Xi ferried Chinese-made vehicles was during his state visit to New Zealand in 2014, the Hong Kong-based South China Morning Post reported earlier. At the time, Xi had opted for two Hongqi L5 cars.

Xi rode on bulletproof Hongqi limousines during his three-nation tour of the Southeast Asia and the Pacific in April this year.

The move was seen as an attempt to promote the Chinese brand on the international stage, in line with Xi’s own 2012 directive to Communist Party cadre that they must eschew foreign wheels in favour of Chinese vehicles.

It was seen as a defiant response to the actions and criticism that have been thrown at China by America’s outspoken, Cadillac-riding president Donald Trump in his current trade war with China, it said.

Su Hao, a professor at Beijing’s China Foreign Affairs University, said choosing the Hongqi for Xi’s recent state visits was likely to be part of an effort to call attention to the Chinese marque on the international stage.

“This showed that Chinese cars were fit for the top state occasions,” Su said.

“The Americans don’t trust local security so they always bring their own [cars],” he said.

“But I don’t think the use of Hongqi is for the same reason.” Hongqi, a traditional ideological symbol of the CPC, is a luxury car brand launched in 1958 by China First Auto Works Group.

The oldest Chinese passenger car marque, it had long been the official vehicle for high-ranking government officials and visiting dignitaries in China.

Mao used it during US President Richard Nixon’s historic visit to China in the 1970s. But starting in the 1990s, the brand fell out of favour as Chinese leaders switched to using imported vehicles.

Xi, in a 2012 speech to Communist Party cadre, said that China’s leaders should only use Chinese cars.

“It doesn’t look right to sit in a foreign car. Lots of foreign leaders use limousines of their own country, unless there isn’t one,” Xi said After Xi’s speech, Chinese Foreign Minister Wang Yi began using a Hongqi H7 as his official vehicle in 2013 and started providing Hongqi cars for the motorcades of visiting foreign leaders, according to the Morning Post’s report.