Mr Arya, a prominent Dalit leader, who along with his son joined the Congress, said the party is a 'scared temple' 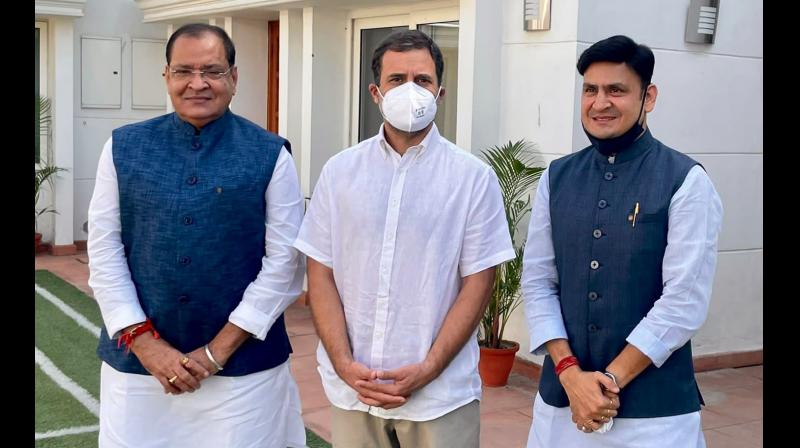 Mr Arya and his son, who represents the Nainital Assembly seat, joined the Congress in the presence of senior party leaders Harish Rawat, K.C. Venugopal and Randeep Surjewala in New Delhi and also met former Congress president Rahul Gandhi at his residence. (Twitter)

New Delhi: In a rude shock for the Bharatiya Janata Party, its minister in the poll-going state of Uttarakhand, Yashpal Arya, and his MLA son Sanjeev Arya on Monday did a “ghar wapsi” to the Congress. Mr Arya, a prominent Dalit leader, who along with his son joined the Congress, said the party is a “scared temple”.

Often in news for prominent leaders from Opposition parties joining it, the BJP may be in for more shocks as speculation is rife that at least two more leaders can do “ghar wapsi” to the Congress.

Mr Arya and his son, who represents the Nainital Assembly seat, joined the Congress in the presence of senior party leaders Harish Rawat, K.C. Venugopal and Randeep Surjewala in New Delhi and also met former Congress president Rahul Gandhi at his residence. Mr Venugopal said it was like a "home coming" for Mr Arya who was also the PCC chief from 2007 till 2014 and claimed that the leaders' "joining (the Congress) was a clear indication of which way the wind was blowing in the state”.

Mr Arya has quit the Congress and joined the BJP just ahead of the last Assembly polls in 2017 after claiming that he had “full faith in PM Narendra Modi’s politics of performance and (the then) BJP president Amit Shah’s vision.”

Speculation is rife that the BJP, which recently appointed its third chief minister in the state in four months, could change more than 35-40 per cent of its sitting MLAs to counter “anti-incumbency.” After a recent meeting between chief minister Pushkar Dhami and former transport minister Yashpal Arya, who represents Bajpur Assembly seat which has a significant Sikh population, the state BJP was abuzz that Mr Arya – a six time MLA, including twice from Uttar Pradesh when Uttarakhand was part of it — can join back the Congress as he was miffed with the BJP’s state leadership.

Bajpur is one the constituencies in the Terai region of the state which has been witnessing farmer unions protests against the Centre’s three farm laws and is also the focus area of the AAP.

Mr Arya’s “ghar wapsi” has come at a time when the Opposition Congress in the hill state is battling major factionalism and infighting and its state unit is abuzz that the Congress leadership could project a Dalit leader for the chief ministerial post after giving a Dalit CM in Punjab, another poll-bound state, to better its poll prospects. However, the Congress’ campaign committee head and AICC general secretary, Harish Rawat, is considered the most popular face of the party in the state.

Since he state's creation in 2000, both the BJP and the Congress have been coming to power in the state alternately. However, almost every opinion poll till now has suggested that the trend could change this time as the BJP is likely to retain power.

While the Congress leadership is trying to put its house in order in this hill state, Congress poll managers are busy working on strategies to take on not just the BJP but also AAP this time. Even Asaduddin Owaisi-led AIMIM is contesting this time, which is expected to divide the Muslim votes. In 2017, the BJP had won 56 seats out of the total 70 and the Congress had managed 11 seats.