The ideal environment for cultivation of saffron is cool dry climate and rich soil with excellent drainage and organic content. 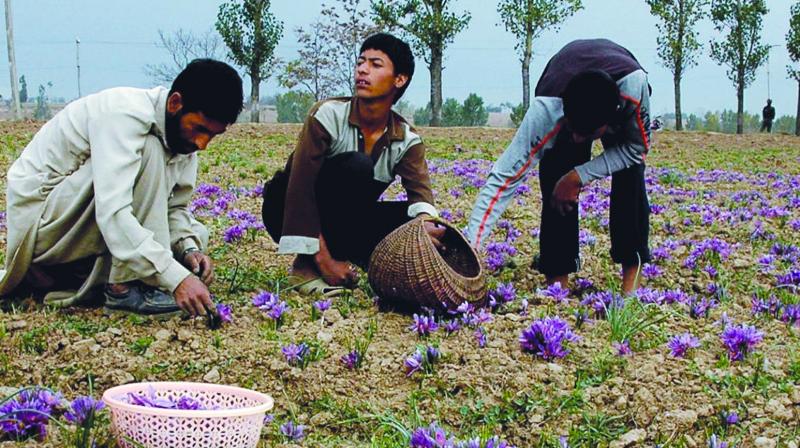 Srinagar: Saffron, one of the world’s most expensive spices, sells at more than Rs 2.5 to Rs 3 lakh a kilogram and Kashmir is the place where it is predominantly cultivated in the country.

Pampore on the peripheries of summer capital Srinagar is the Valley’s saffron district as nearly 90 per cent of the cultivation of the exotic purple flowers takes place here. It is said that saffron has been grown in the field of Pampore for close to 2,500 years. Some chronicles mention the old name of Pampore as Padmapur or lotus city.

These chronicles also say that saffron was brought to India by the Persian rulers around 500 B.C. After conquering Kashmir, they transplanted the saffron crocus corns to the Kashmiri soils. However, as per the Kashmiri folklore, the spice was brought to the scenic Valley by two Sufi ascetics Khawja Masood Wali and Sheikh Sharifuddin Wali during the 11th or 12th centuries A.D.

Elsewhere in J&K, saffron is cultivated in Kishtwar region of the Chenab valley.

The ideal environment for cultivation of saffron is cool dry climate and rich soil with excellent drainage and organic content. The long and silky saffron filaments are the three deep red threads of the saffron flower. These are carefully picked from the flower by hand. There are three grades of saffron known as “Saffron Lachha”,

“Saffron Mongra” and “Saffron Zarda”. The difference between the saffron grown elsewhere and in Kashmir is: the stigmas of Kashmiri saffron are extremely long and with a thicker head and are also of a deep red colour. Kashmiri saffron has an extremely dark maroonish purple hue which suggests the saffron’s mind-blowing flavour, aroma and colouring power.

However, the production of saffron in the Valley has been declining due to uneven rainfall and erratic temperatures over the past couple of years.

In 2005,the production of saffron flower per acre of land was 120 to 160 kilograms which dipped to 12 kilograms last year. Each kilograms of saffron is derived from about 75,000 flowers. This year the yield is expected to be the lowest in decades.

Farmers also say that lack of irrigation facilities and construction activity around the fields is adversely affecting the saffron yield.

Manzoor Ahmad Lone, secretary, agriculture production department, has asked the mechanical irrigation department to maintain the manpower for the regulation of borewells and sprinkle irrigation systems in  the saffron growing areas of the Valley these areas. “I’m hopeful things will change for the better  in a couple of years,” Mr Lone said.