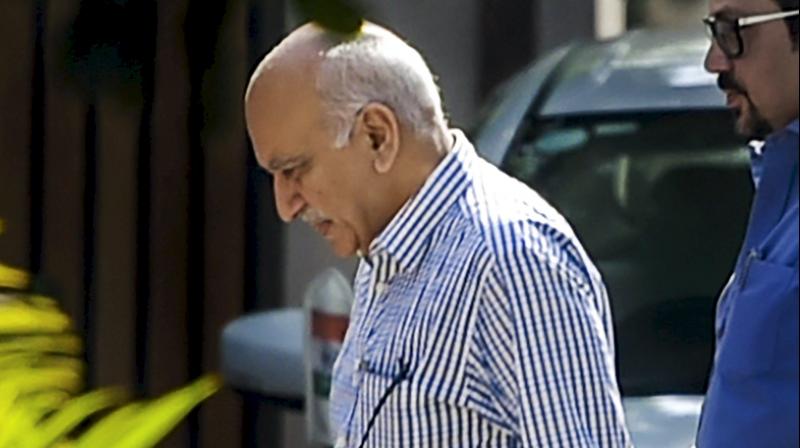 MJ Akbar, who had resigned from the Union Council of Ministers on October 17, had earlier told the court that an "immediate damage" has been caused to him due to the "scurrilous", concocted and false allegations of sexual misconduct levelled against him. (Photo: File | PTI)

New Delhi: A former woman colleague of ex-Union minister M J Akbar, who has filed a criminal defamation case against journalist Priya Ramani, told a Delhi court on Monday that his reputation has been "destroyed" and "damaged irreparably" due to allegations of sexual misconduct.

Joyeeta Basu, the editor of Sunday Guardian, who appeared as a witness to support Akbar's case, told Additional Chief Metropolitan Magistrate Samar Vishal that Ramani posted all her tweets "intentionally with a purpose to harm" Akbar's "reputation and goodwill".

"I have seen tweets by Priya Ramani dated October 10, 2018 and October 13, 2018. I have overcome by doubts but I know from the number of questions raised by people, I know personally that his reputation has been destroyed and damaged irreparably," Basu told the court.

"After reading these tweets by Ramani, I believe that this vilification was conducted and the tweets were published intentionally by Ramani with a purpose to harm Akbar's good reputation and goodwill in the eyes of society," she said.

After Ramani’s tweet, over a dozen former women colleagues of M J Akbar accused him of sexual misconduct and harassment. Another former colleague at The Asian Age, and presently an editor with America’s National Public Radio, Pallavi Gogoi brought rape charges against the NDA’s former junior minister.
Nearly twenty women also signed a petition in in support of Ramani.

In the statement, they said: “When Ms. Ramani spoke out against him in public, she spoke not only about her personal experience but also lifted the lid on the culture of casual misogyny, entitlement and sexual predation that Mr Akbar engendered and presided over at The Asian Age.

Ms Ramani is not alone in her fight. We would request the honourable court hearing the defamation case to also consider testimonies of sexual harassment of some of us at the hands of the petitioner, as also of the other signatories who bore witness to this harassment.”

Further, Akbar's witness Joyeeta Basu said that she has worked with Akbar for 20 years and had not heard anything "untoward" from the staff of the organisation where they worked together. He was a public figure who was held in high esteem.

"I have always held Mr Akbar in high regard. He has been perfectly professional in his dealings with me. He has always been a tough taskmaster, a thorough professional and a brilliant teacher," Basu said.

She said she considered him to be "a brilliant journalist, a scholarly writer and a thorough gentleman with an impeccable reputation".

Basu said that she was "shocked, disappointed, embarrassed" to see Ramani's tweets against Akbar and "in spite of my experience with him, his image, his reputation took a beating in my eyes on reading these tweet/article.”

“It was aggravated during my interaction with friends and colleagues who had read and heard about the widely publicised tweets and articles and asked me whether he was really like that? They questioned his character and said that his image has taken a severe beating and had been lowered in their eyes. They said that his reputation had been permanently damaged as far as they were concerned," she said.

The court has now posted the matter for next hearing on December 7.

Ramani has accused Akbar of sexual misconduct around 20 years ago.

Akbar, who had resigned from the Union Council of Ministers on October 17, had earlier told the court that an "immediate damage" has been caused to him due to the "scurrilous", concocted and false allegations of sexual misconduct levelled against him.

Akbar's name cropped up on the social media when he was in Nigeria, as the #MeToo campaign raged on in India. Multiple women have come out with accounts of alleged sexual harassment by him when he was a journalist.

He had termed the allegations "false, fabricated and deeply distressing" and said he was taking appropriate legal action against them.

Expressing her readiness to fight the defamation allegations, Ramani had said, "Rather than engage with the serious allegations that many women have made against him, he seeks to silence them through intimidation and harassment."