Process to set up trust for Ayodhya Ram temple starts

The scheme shall envisage the setting up of a trust with a board of trustees or any other appropriate body. 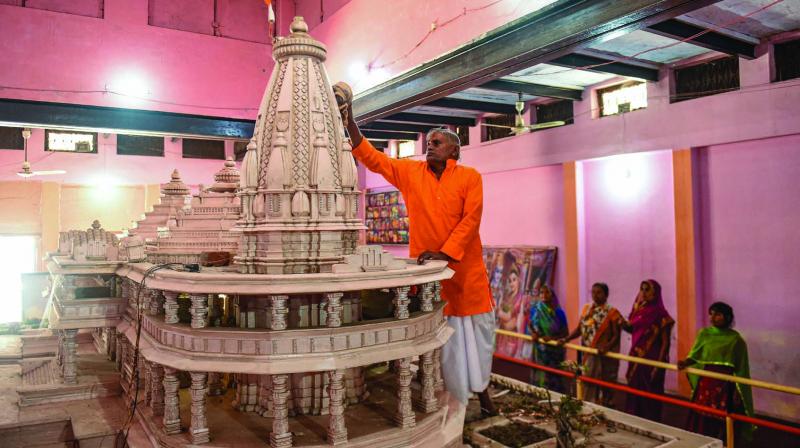 A replica of the proposed Ram Mandir on display at Karsewakpuram in Ayodhya on Monday. (Photo: PTI)

New Delhi: The Centre has started the process of setting up a trust, as mandated by the Supreme Court in its Ram Janmabhoomi-Babri Masjid verdict, with a team of officers examining the order threadbare, officials said on Monday.

Opinions of the ministry of law and the attorney-general will be taken on how to proceed on setting up the trust that will fix the modalities for construction of a Ram temple in Ayodhya.

A team of officials have been tasked with studying the apex court order threadbare for its technicality and nuances so that the trust can be constituted exactly as per the Supreme Court verdict, an official said, adding consultation process is underway, but no decision has been taken so far.

In a historic and unanimous verdict on Saturday, a five-judge Constitution Bench headed by Chief Justice Ranjan Gogoi cleared the way for the construction of a Ram temple at the 2.77-acre disputed site in Ayodhya, and directed the Centre to allot a five-acre plot at a “prominent” location to the Sunni Waqf Board for building a mosque.

In its unanimous, 1,045 page verdict, the apex court said, “The Central government shall, within a period of three months from the date of this judgment, formulate a scheme” under the Acquisition of Certain Area at Ayodhya Act, 1993.

“The scheme shall envisage the setting up of a trust with a board of trustees or any other appropriate body... The scheme to be framed by the Central government shall make necessary provisions in regard to the functioning of the trust or body including on matters relating to the management of the trust, the powers of the trustees, including the construction of a temple and all necessary, incidental and supplemental
matters.”

The top court also directed the Centre or the state government to simultaneously hand over a suitable plot of five acres to Sunni Waqf Board for construction of a mosque in Ayodhya.

Delivering the verdict on a case that has long polarised the country and frayed the secular tapestry of Indian society, a five-judge bench of the apex court headed by CJI Ranjan Gogoi said the faith of Hindus that Lord Ram was born at the site was undisputed, and he is symbolically the owner of the land.