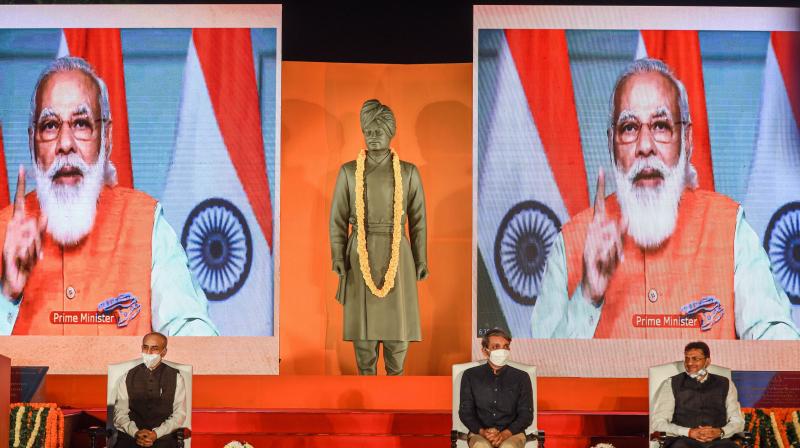 New Delhi: Prime Minister Narendra Modi on Thursday unveiled a statue of Swami Vivekananda in the JNU campus and asserted that people may have ideological differences but ideology should be seen supporting and not opposing the nation in matters of national interest.

Giving priority to one's ideology over national interest has harmed the democratic system of the country a lot, he said in his address to students after unveiling the statue through video conferencing.

Jawaharlal Nehru University has long been considered a citadel of the Left, with student unions affiliated to it calling the shots in the campus.

The BJP and Hindutva groups, including RSS' student wing ABVP, have often claimed that those with "anti-national" sentiments have found support from the Left-affiliated bodies.

The decision to install a life-size statue of Vivekananda is imbued with symbolism.

In his address, Modi said good reforms were earlier considered bad politics but now it is good politics because his government's intentions and commitment are pure, and it has prepared a "protection shield" for the poor and other vulnerable sections before carrying out reforms.

People have endorsed our reform measures with their votes, he said.

The prime minister said the statue in the campus will inspire everyone and instill courage and compassion that Swami Vivekananda wanted to see in everyone.

"Swami Vivekanda wanted that education in the country should be such that it provides self-confidence to individuals and makes them 'atmanirbhar' in every way. The new National Education Policy is on the same line and has inclusion at its core," he added.