Modi said that the affection he received while travelling through Gujarat gives him strength and motivation to work for India. 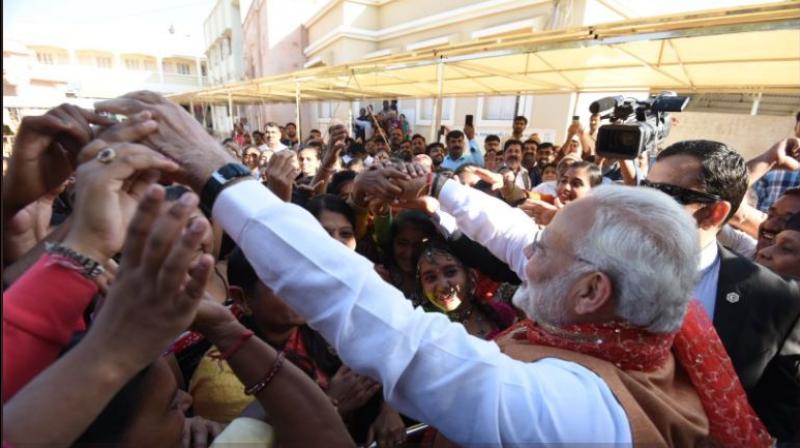 Concluding his vote appeal, Modi said he was devoted to the betterment of the people of Gujarat and India and urged the people to vote for the BJP in the elections. (Photo: Twitter/@narendramodi)

Ahmedabad: Prime Minister Narendra Modi made an emotional appeal to the people of Gujarat as the campaigning for the second phase of Gujarat Assembly elections came to an end on Tuesday.

Modi concluded the Bharatiya Janata Party’s (BJP) election campaign with prayers at Ambaji temple in Banaskantha and then took a flight in sea-plane to Dharoi Dam in Mehsana district from Sabarmati River in Ahmedabad.

Modi did not address any rallies but took to Twitter to urge the people to vote in record numbers on Dec 14.

"I call upon the people of Gujarat to not only give the BJP an overwhelming majority but also ensure that BJP wins in every polling booth across the state" he said.

Exuding confidence in the BJP rule, Modi said, "With the Government of India and Government of Gujarat working together, the strength rises manifold. This 1+ 1 is not 2 but 11 and together we will take Gujarat to new heights".

Modi said he was honoured to travel across the length and breadth of Gujarat to seek the blessings of the people.

"During my travels across Gujarat, the level of affection I have received from the people is unparalleled in my 40 years of public life," the PM said.

"This affection gives me strength and motivates me to devote all my time for India’s development," he added.

The Prime Minister also took the opportunity to attack the Opposition accusing it of spreading 'lies' about Gujarat, the state's growth and about him personally.

"It is natural for every Gujarati to feel hurt. People of Gujarat will give a fitting reply to the negativity and lies of the opposition," he said.

"Victory of BJP is a guarantee for a bright future," he added.

Concluding his vote appeal, Modi said he was devoted to the betterment of the people of Gujarat and India and urged the people to vote for the BJP in the elections.

Tuesday was the last day of campaigning for the second phase of Gujarat polls.

The fate of the BJP and the Congress would be decided on December 18, when the result of the assembly elections would be declared.