34 years old, suave and foreign-educated Sweta Brahmbhatt has trained to be a politician from IIM-Bangalore. 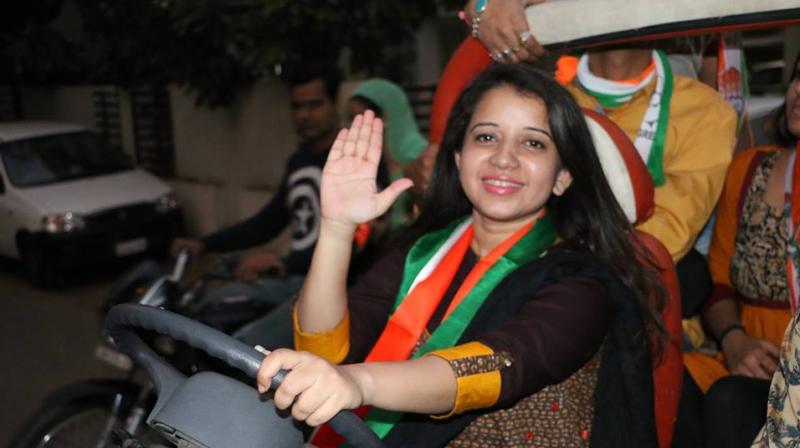 Brahmbhatt's father is a senior Congress leader of the city and the aspiring politician is confident of winning the hearts of voters through her 'vision and determination'. (Photo: Facebook).

Ahmedabad: The city's Maninagar seat, a BJP bastion and constituency of Narendra Modi before he became the prime minister, is set for an interesting contest between the ruling party's sitting MLA, Suresh Patel and Congress' suave and foreign-educated young face Shweta Brahmbhatt.

Brahmbhatt, 34, is perhaps the only candidate in this Assembly poll who has received training to be a politician, that too from the Indian Institute of Management (IIM) Bangalore.

Though Brahmbhatt's selection came as a surprise to many, despite the fact that her father Narendra Brahmbhatt is a senior Congress leader of the city, the aspiring politician is confident of winning the hearts of voters through her "vision and determination".

However, it will not be easy for the Congress to take on the BJP in Maninagar, which houses the state headquarters of the Rashtriya Swayamsevak Sangh.

Maninagar, the constituency where people have not seen a nail-biting finish in the elections, is considered as an unbreachable bastion of the BJP since 1990.

Prime Minister Narendra Modi, then as Gujarat chief minister, represented it in the Assembly in 2002, 2007 and 2012. Prior to that, BJP leader Kamlesh Patel represented the seat from 1990 till 1998.

In 2012, Modi defeated his closest rival, Congress candidate Shweta Bhatt, the wife of former IPS officer Sanjiv Bhatt who was a stringent critic of the Gujarat government under Modi, by a margin of over 86,000 votes.

Following Modi's resignation from Maninagar after becoming the prime minister office in 2014, the people elected BJP's Suresh Patel by a thumping majority of over 49,000 votes in the byelection to the seat.

Now, Patel will face first-timer Brahmbhatt, who did her masters in international finance from the University of Westminster, London in 2005.

She also worked as an investment banker with multinational firms in India.

In 2012, she went to IIM Bangalore to pursue the 'India-Women in Leadership' programme, designed to provide training to aspiring women politicians.

Brahmbhatt feels it is necessary "to be a part of system to change the system".

"I have seen politics since early age. I consider politics as social work. My sole purpose to contest this election is to be the voice of youth and women," she said.

"Despite being a highly educated woman, I faced many troubles in setting up my own business, mostly due to red-tapism. I want to make sure that others don't face it," she said.

Brahmbhatt claimed that she has been selected by the Congress to contest from the seat because of her "vision and zeal to do something for the next generation."

"My focus is on education, employment and women empowerment. I am sure that people of this seat, especially the youth and women, will put their trust in me," the aspiring leader said.

On the other side, BJP's nominee Suresh Patel exuded confidence of his victory in the party stronghold.

"The people of Maninagar are attached to Modi's ideology of development. During my campaigning, I haven't seen a single Congress worker in Maninagar canvassing for their candidate. This is how Congress works. I firmly believe that she will lose her deposit," the 57-year-old leader said.

As many as 93 Assembly seats of north and central Gujarat would go to polls in the second phase on December 14.

Votes would be counted on December 18.