While addressing media Rahul Gandhi said, 'PM has not spoken a word about corruption and is silent on Jay Shah and Rafale deal.' 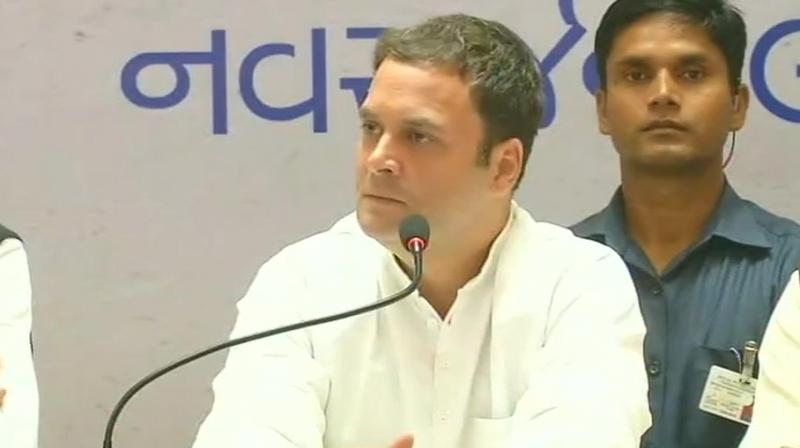 'The PM is either talking about Congress or himself during his public meetings,' Rahul said. (Photo: ANI | Twitter)

Ahmedabad: A day after being elected unopposed president of the Congress, Rahul Gandhi on Tuesday attacked both Prime Minister Narendra Modi and the Bharatiya Janata Party (BJP) over what he said was their silence on corruption.

Addressing media on the last day of campaigning for the ongoing Gujarat Assembly elections, ahead of the second and final phases of voting Rahul Gandhi said, “PM has not spoken a word about corruption and is silent on Jay Shah and Rafale deal.”

"Earlier Modiji used to talk about corruption everywhere. But since we raised the issues of Jay Shah (BJP President Amit Shah's son) and the Rafale defence deal (with France), he stopped talking about corruption," the Congress leader said.

"The PM is either talking about Congress or himself during his public meetings," Rahul added.

Talking about the internal conflict in the Congress following Mani Shankar Aiyar's remarks, Rahul Gandhi said he had made his position clear.

"We took action against him. But what Modiji has been saying about Dr Manmohan Singh is also not acceptable. As Congress president, my priority will be to strengthen the party and you will see that in Gujarat," he said.

Exuding confidence on coming to power in Gujarat on December 18, the day the results will be announced, Rahul said, "The BJP has lost its position."

Read: Neither land, nor employment, only insecurity for Dalits in Gujarat: Rahul attacks PM

"After the first phase voting in the state (December 9), we are confident that we are going to form the government here (Gujarat)," the newly elected president of Congress said.

Rahul also assured that all decisions in Gujarat will be made in consultation with the people of Gujarat.

Further intensifying his attack on the PM, Rahul said, “PM Modi said 2 crore youth will get jobs, but the reality is in front of us.”

“In last 22 years PM Modi and Chief Minister Vijay Rupani have initiated only one-sided development here (Gujarat). Not everyone has been given their rights,” the Congress President-elect added.

Rahul countered questions on his visits to temples during the election campaigning and said, "Whenever I went to a temple I just prayed for a 'Sunehra Bhavishya' for the people of Gujarat, a better development here. Is it wrong to go to a temple?"

Rahul also visited Jagannath Temple in Ahmedabad on Tuesday morning, his 29th such visit in 90 days.

Rahul Gandhi said that the people of Gujarat has given him a lot of love during the last few months which he will never forget.

"Wherever I went, I was offered moongfali, dhokla, thepla and I was surprised with their hospitality. The people of Gujarat can approach me whenever they want to," Rahul added.

"If PM Modi wants to fly in a seaplane that is not wrong, but it is a distraction. The real question is what has been done for the people of Gujarat in the last 22 years," Rahul Gandhi said.

The second and final phase of the Gujarat Assembly elections is due on Thursday. The results will be out on December 18.