Why are charges levelled only in rallies? If Pak is interfering, let the Army enter that country and take action, the Sena suggested. 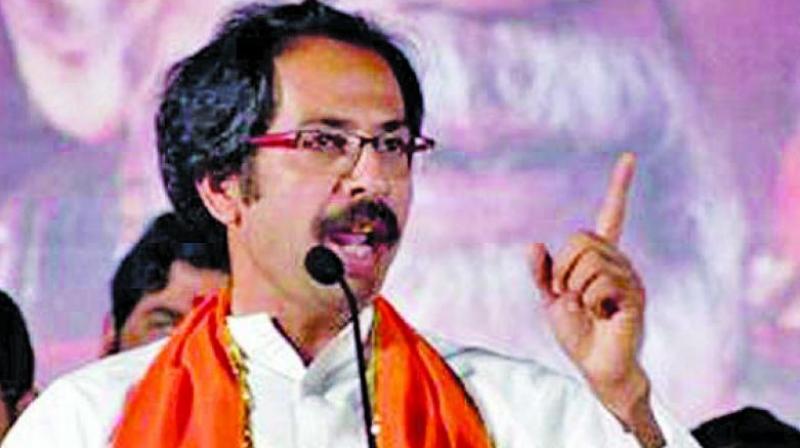 'Modi has levelled a serious charge that Pakistan is interfering in Gujarat polls. We can understand the worries of Modi but a PM is supposed to take action and not level allegations,' the Sena said in its editorial mouthpiece 'Saamana'. (Photo: PTI)

Mumbai: Launching a sharp attack on Prime Minister Narendra Modi, the Shiv Sena on Tuesday said, dragging Pakistan into Gujarat election campaign was an "impious" way of trying to win the polls.

A prime minister is supposed to take action and not level allegations, the ally said and took a swipe at Modi saying Gujarat has become even more important than Kashmir.

Modi, during his election campaign on Sunday, suggested that Pakistan was trying to influence the Assembly polls in Gujarat, claiming some Pakistani officials and former Prime Minister Manmohan Singh met a day before Mani Shankar Aiyar made the "neech" remark against him.

"Prime Minister Modi has levelled a serious charge that Pakistan is interfering in Gujarat polls. We can understand the worries of Modi but a PM is supposed to take action and not level allegations," the Sena said in its editorial mouthpiece 'Saamana'.

The Chinese troops had recently crossed over to the Indian side from Sikkim border, but if the Prime Minister worries more about Pakistan in Gujarat, it makes the Sena worry too, said the editorial.

"The question that can now arise is if someone is trying to divide Hindu-Muslim votes to win elections," it said, adding that the Prime Minister, instead of only talking about the neighbouring nation's interference, should take action against it.

Nowadays, in all elections, either Pakistan or fugitive underworld don Dawood Ibrahim is brought to the forefront, the Sena quipped.

"When sand below the feet starts moving, Pakistan and Dawood chanting begins. It is happening today as well. This is an impious way," it said.

The Sena further said that even in Bihar polls, BJP's national president had brought in Pakistan.

Despite him saying that crackers will be burst in Pakistan if Nitish Kumar wins, the latter decimated the BJP, it said.

If the Prime Minister had all the details of the meet at (suspended Congress leader) Mani Shankar Aiyar's house and knew the meeting was to undertake anti-national activities, why did he only level allegations and why were all those present at the meeting not arrested and an inquiry conducted.

Why are allegations levelled only in election rallies? If an interference from Pakistan is happening, let the Indian Army enter that country and take action, the Sena suggested.

"The country expects Modi to work. How many times will you chant Pakistan's name? Even people like (BJP veteran) Yashwant Sinha and Nana Patole level allegations," the Sena said.

Patole, a lawmaker from Maharashtra, who had denounced the BJP over a host of issues, including farmers' distress, last week resigned from the ruling party and the Lok Sabha.