Jaitley has filed a defamation suit against Kejriwal among 6 AAP leaders and alleges that Kejriwal's denial of the charges is false. 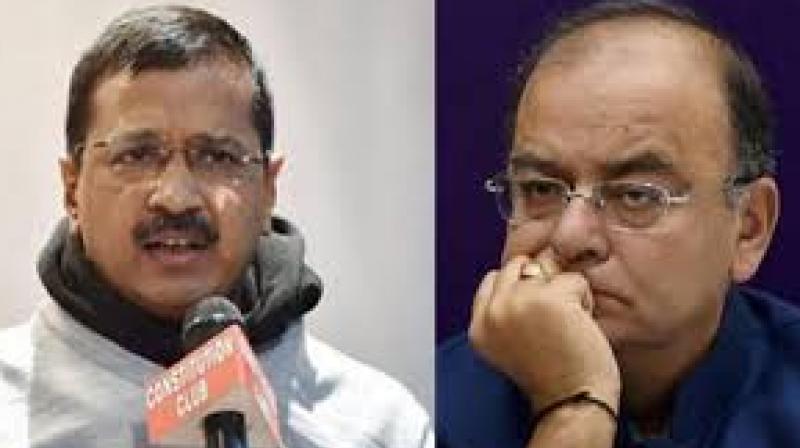 The Bar Council Rules and the Advocates Act 1961 prohibits a senior advocate from taking instructions in any case directly from a client, says Arvind Kejriwal. (Photo: PTI)

New Delhi: Chief Minister Arvind Kejriwal has denied before the Delhi High Court that he filed a false affidavit claiming he had not instructed his counsel to use derogatory words against Union Minister Arun Jaitley.

Kejriwal's response came in pursuance to the August 23 notice issued to him by Justice Manmohan on Jaitley's plea seeking action against the chief minister for making a false statement during his cross-examination in a defamation suit against him and five other AAP leaders.

Jaitley, who has filed a Rs 10 crore defamation suit against Kejriwal and five other AAP leaders, had moved a fresh application alleging that the chief minister had falsely denied that he had instructed his then senior lawyer to make derogatory comments.

This was opposed by his former counsel Ram Jethmalani two days later.

The high court listed the matter for hearing on April 26.

In his response filed through advocate Anupam Shrivastav, Kejriwal has denied that he has committed any perjury or made any false statement supported by an affidavit under oath.

"It is denied that the Senior Advocate representing the Defendant 1 (Kejriwal) on instructions had used abusive, offensive and per se defamatory words against the applicant/ plaintiff (Jaitley).

"On the contrary the Defendant No.1 had at no time instructed his counsels to use abusive, offensive or defamatory language against the applicant," he said.

The chief minister also submitted that the Bar Council Rules and the Advocates Act 1961 prohibits a senior advocate from taking instructions in any case directly from a client.

"Therefore no utterances of a senior advocate can be attributed to the instructions of the client unless they are received through the Advocate on Record (Instructing Counsel)," he said.

Kejriwal said the union minister's application was "completely baseless" and was filed with the sole motive of "attempting to overawe the judicial process" sought its dismissal with costs.

"It is denied that untrue averments have been made in the pleadings which would amount to committing perjury," he said.

The high court had on August 23 sought Kejriwal's response on the plea seeking that a criminal complaint be lodged against him for allegedly filing a false affidavit that he did not instruct his counsel to use derogatory words against Jaitley.

During the cross examination on May 17, Kejriwal's then counsel Jethmalani had used offensive words against Jaitley.

Jethmalani had categorically stated in court that he had received specific instruction from Kejriwal to use derogatory words against Jaitley.

The application had stated that in an interview to the media on July 26, Jethmalani reiterated his earlier statement that he had instructions from Kejriwal to use the words.

In his application, Jaitley had said that on July 28, Jethmalani had written a letter to Kejriwal. He copied it to the union minister stating he had not received a reply from the chief minister on his July 20 letter.

According to the application, in the July 20 letter to Kejriwal, Jethmalani had said "ask your (Kejriwal) conscience how many times you used the word..."

Seeking strict action against Kejriwal for allegedly stating false facts, Jaitley's counsel had said, "a blatant, false and dishonest statement under oath by such a high functionary must attract severe and stringent punishment."

"Committing perjury before this court by making false averments in pleadings is squarely covered under provisions of section 340 of CrPC and the defendant (Kejriwal) deserves to be punished in accordance with law," it had said.

The high court had on July 26 asked Kejriwal not to put "scandalous" questions to Jaitley during the cross-examination in the defamation suit filed by the Union minister against the chief minister and five others -- Raghav Chadha, Kumar Vishwas, Ashutosh, Sanjay Singh and Deepak Bajpai.

The first Rs 10 crore defamation suit was filed by Jaitley against Kejriwal and five other AAP leaders in 2015.

The second Rs 10 crore defamation suit was filed on May 22 this year only against the chief minister.

Jaitley, who denied all the allegations of corruption levelled by the AAP leaders in December 2015, had claimed that they had made "false and defamatory" statements in the case involving the DDCA, thereby harming his reputation.

The cross-examination of Jaitley by Jethmalani on May 17 led to heated exchanges between them.

Kejriwal had on July 24 told the high court that there was no instruction from him to Jethmalani to use objectionable remarks against Jaitley.