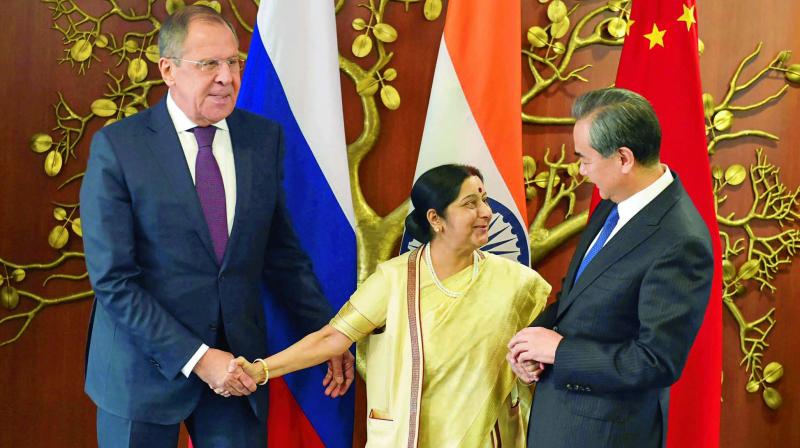 New Delhi: The foreign ministers of Russia,  India and China (RIC) — Sergey Lavrov, Sushma Swaraj and Wang Yi — held trilateral talks in the Capital on Monday on a host of issues but Pakistan-based terror groups Lashkar-e-Tayyaba (LeT) and Jaish-e-Mohammad (JeM) were not specifically named in the RIC joint communique that was issued on Monday. However, the communique did state that the three countries “agree to strengthen cooperation to take decisive and concerted actions against globally proscribed terrorists and terror entities” and that the three countries “condemn all forms of terrorism and all terrorists, terror entities and organisations listed by the UN Security Council.” Both the LeT and the JeM are UN-proscribed terror outfits. Indian Government sources said the condemnation of terror and all UN-proscribed outfits in the  communique included the two terror outfits even though they were not mentioned by name.

However, just three months ago, the two Pakistan-based terrorist organisations had been named—-as groups indulging in violence——in a joint statement at the BRICS (Brazil-Russia-India-China-South Africa) Summit in China’s Xiamen city, indicating that the Chinese may have somewhat hardened their stand since then. China had once again recently blocked efforts led by India, the US, Britain and France to get JeM chief Masood Azhar banned by the UN although the JeM itself has already been banned by the UN. Ms. Swaraj, however, raised the terrorism issue strongly during the RIC talks, saying terror outfits like the LeT “directly undermine international peace and security and endanger ongoing efforts to strengthen the global economy and ensure sustainable growth and development” She also told her other two counterparts that “India strongly recommends a comprehensive policy for dealing with global terrorism”.

After a separate bilateral meeting with her Chinese counterpart Wang Yi, Ms, Swaraj said the two countries (India and China) agreed that they “should further strengthen our mutual trust to develop a better understanding”. This also seems to be a veiled reference to the Doklam military face-off between the two countries earlier this year, particularly in the wake of the Chinese position that the Doklam issue was handled with “restraint” by it. According to news agencies, the Chinese Foreign Minister, during the bilateral talks, spoke about a political settlement to resolve “hotspot and difficult issues” and also pitched for dialogue over use of force.

Meanwhile, even though the RIC Joint Communique “commended Russia-led counter-terrorism efforts and achievements in Syria aimed at defeating international terrorism”, there was no mention of the impunity with which Pakistan has been backing terror groups from its soil such as the LeT and JeM. China is an all-weather friend of Pakistan and its biggest backer at global fora. However, the Communique did state, “We underline the primary and leading role and responsibility of States in preventing and countering terrorism and extremism and reiterate that all States should take adequate measures to prevent terrorist activities from their territory.” But given the fact that Pakistan—-the biggest violator of this tenet—was not named, these may seem mere words.

The three RIC countries on Monday also agreed on “maintaining regional security and economic architecture in the Asia-Pacific that is open, inclusive, and based on multilateralism, universally recognised principles of international law” and also resolved to “support freedom of navigation and overflight rights based on the principles of international law, particularly UNCLOS”. This has been of interest to India and the western countries, given the Chinese military assertiveness in south-east Asia and Beijing’s maritime disputes with smaller nations in the region. But China ironically argues that it too stands for the same while opposing external interference by countries outside the region.

“The discussions included issues like the challenges of the global economy, increasing terrorism, transnational organised crime, smuggling of drugs, natural and man-made disasters, climate change, and changing political scenario in Middle East and North Africa,” Ms. Swaraj further said. “These annual talks give an opportunity to us three countries to exchange our mutual views with each other and identify our contributions to international peace, security and development. Our discussions today were focused on four broad cluster of areas, namely, Economic and Developmental issues; Fight against terrorism; Global / Multilateral issues; and, Regional issues,” she added.

The RIC Joint Communique stated, “We condemn terrorism in all its forms and manifestations including the recent heinous terrorist attacks around the world and reaffirm our determination to prevent and counter terrorism in all its forms and manifestations. We reaffirm that all acts of terrorism are criminal and unjustifiable irrespective of their motivations, committed wherever and by whomsoever. ... We agree to strengthen cooperation to take decisive and concerted actions against globally proscribed terrorists and terror entities. We condemn all forms of terrorism and all terrorists, terror entities and organisations listed by the UN Security Council.”

“We stress that those committing, organising, inciting or supporting terrorist acts must be held accountable and brought to justice in accordance with the obligations under international law, including the principle of “extradite or prosecute” as well as the applicable domestic legislations,” the Communique added.

Ms. Swaraj also held separate bilateral meetings with her two counterparts. “In addition to our tri-lateral engagement, I had the opportunity to have separate meetings with Foreign Minister Lavrov and with Foreign Minister Wang Yi and discuss our bilateral relations in a comprehensive manner. We had a frank and forward-looking exchange on a wide-range of issues. Foreign Minister Wang Yi and I agreed that we should further strengthen our mutual trust to develop a better understanding between the two parties. And it will be better to meet again and without agenda, which will help us to expand our mutual understanding,” Ms. Swaraj said.

The RIC Joint Communique further said, “We agree that maintaining regional security and economic architecture in the Asia-Pacific that is open, inclusive, and based on multilateralism, universally recognised principles of international law, is imperative for lasting peace and stability in the region. In this regard we reiterate our commitment to further promote dialogue on regional security architecture including within the East Asia Summit framework. ... Recognising the growing importance of maritime-trade in an increasingly globalised world, we support freedom of navigation and overflight rights based on the principles of international law, particularly UNCLOS.” It also referred to the assessment of the three countries on the situation in Afghanistan, Syria, Yemen and the Korean Peninsula.