Five columns of the Army have been requisitioned and deployed in Assam, an Army statement said. 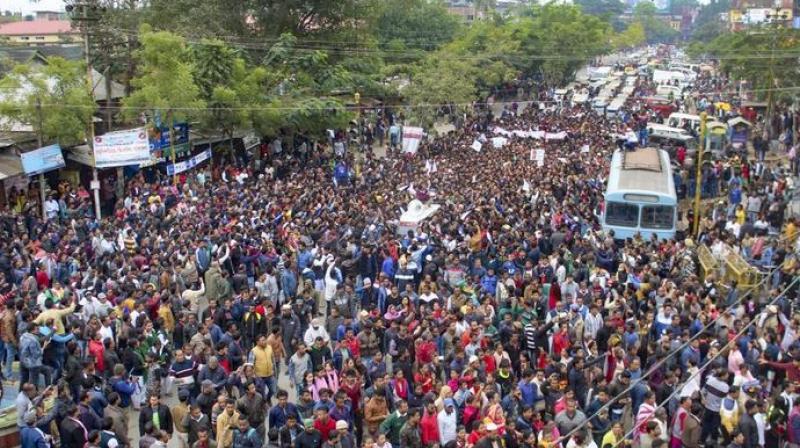 Vehicles were stranded in various cities of Assam due to heavy blockade. (Photo: PTI)

Guwahati: Police opened fire to disperse protesters at Lalungaonn area here on Thursday in which some persons were reportedly injured, a senior police officer said. The officer claimed that the protesters hurled stones and bricks at the policemen and when attempts to pacify them did not deter the mob, the security personnel opened fire at them.

The officer did not specify the number of people injured in the firing, though the protestors claimed that at least four persons were injured. Defying curfew, protesters came out on the streets of Guwahati on Thursday to protest the Citizenship (Amendment) Bill that was passed in Parliament even as the Army conducted flag marches in Guwahati, Dibrugarh, Jorhat and Tinsukia.

Five columns of the Army have been requisitioned and deployed in Assam, an Army statement said.

Influential students' body AASU and peasants organisation KMSS have asked the people to defy the curfew imposed in Guwahati since Wednesday evening and come out of their homes to protest against the bill. Protesters burnt effigy of senior Assam Minister Himanta Biswa Sarma in Ambori area here while students of the Cotton University and Handique Girls college were also seen protesting against the CAB. One of the protesters said "It is a fight for our existence."

The Railways has suspended all local train services in Tripura and Assam, and short-terminated long-distance trains at Guwahati following protests in the two states over the passage of the Citizenship (Amendment) Bill in Parliament, a railway spokesperson told PTI on Thursday.

The decision was taken on Wednesday night in view of the security situation in the region, Northeast Frontier Railway spokesperson Subhanan Chanda said, adding many passengers are stranded in Kamakhya and Guwahati.

"Passengers are stranded and we are trying to help them as much as possible. We are mulling to run special trains to ferry these passengers, but are still weighing if the risk is worth it. It might be a security threat for passengers if protesters stop the trains. As of now all passenger trains have been suspended and trains from outside the region are being short terminated at Guwahati," Chanda said. Assam has been on the boil ever since the contentious Citizenship (Amendment) Bill, which seeks to provide Indian citizenship to non-Muslim migrants from Pakistan, Bangladesh and Afghanistan, was tabled in the Lok Sabha.

The Lower House cleared the Bill on Monday and the Rajya Sabha on Wednesday. People defied curfew in Guwahati on Thursday morning to protest the Bill as the situation remained tense throughout Assam, with the Army conducting flag march in the city. Guwahati, the epicentre of anti-CAB protests, was placed under indefinite curfew last night while the Army was called in at four places and Assam Rifles personnel were deployed in Tripura on Wednesday as the two northeastern states plunged into chaos over the hugely emotive Citizenship (Amendment) Bill or CAB.

All Assam Student's Union has called for a protest in Guwahati, while the Krishak Mukti Sangram Samiti appealed to the people to come out on the road for peaceful protest. The people were on the road in the night despite curfew.

After a railway station in Dibrugarh's Chabua, the hometown of the Assam Chief Minister Sarbananda Sonowal, was set on fire by protestors late on Wednesday night and the Panitola railway station in Tinsukia district torched, 12 companies of the Railway Protection Special Force (RPSF) have been dispatched to the region, DG of RPF Arun Kumar told PTI.

Seven companies of the force are already stationed in the region, the DG of RPF said, adding that he was in touch with the local police to secure railway installations in the region. Officials in Delhi said that all local passenger trains in Tinsukia, Lumbding and Rangia Divisions have been cancelled. No trains are moving beyond Guwahati, they said.

The Army conducted a flag march in Guwahati on Thursday morning. Vehicles were stranded in various cities of Assam due to heavy blockade. Half-a dozen vehicles were burnt. Houses of BJP and Asom Gana Parishad (AGP) leaders were attacked in various parts of the state. Curfew was imposed in Dibrugarh for an indefinite period late on Wednesday night, as protesters targeted the houses of Sonowal and Union minister Rameswar Teli in the district.