Tyres were burnt and logs placed on roads and rail tracks to stop movement of vehicles and trains across the state. 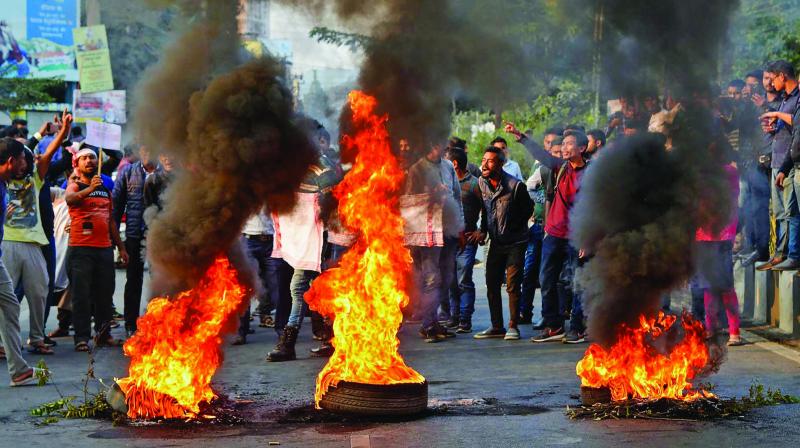 College students burn tyres during the protest against the Citizenship Amendment Bill in Guwahati on Wednesday. (Photo: PTI)

Guwahati/Agartala: With the Rajya Sabha all set to clear the passage of the Citizenship (Amendment) Bill to becoming law, massive and spontaneous protests broke out in several districts of Assam, including Guwahati, forcing the authorities to call in the Army and impose indefinite curfew in the state’s capital.

The protest in the capital city was so sudden and so vociferous that most of the schools which were open on Wednesday decided to declare holiday by 12 noon to avoid any untoward incident with students while returning back.

In the violent protests, six vehicles were burnt, including two school buses, by the protesters in front of the state secretariat. Protesters were also seen pelting stones on the police force.

The curfew, which was imposed in Guwahati at 6.15 pm, was later extended indefinitely, Assam’s additional director general (law and order) Mukesh Agrawal told PTI. Despite the curfew, arson continued in several areas.

One column of Army is on standby in Assam’s Bongaigaon district and another one in Dibrugarh, ready to be deployed if required.

A day after Assam witnessed total shutdown in protest against CAB, on Wednesday thousands of students from every college in Guwahati, including those from Guwahati Medical College, Assam Engineering College, took out a massive protest march on the Guwahati-Shillong Road, the city’s main road leading to the state secretariat in Dispur.

The protesting students clashed with the police and the CRPF after they were stopped at Bhangagarh. Several students were caned by police and tear gas shells were also fired to disperse the crowd.

Informing that the Army was called in Bongaigaon district after some anti-CAB protesters tried to vandalise a village, security sources added that the Army was on standby as police and CRPF had managed to control the situation.

In Tripura, Internet services remained suspended for the second day and paramilitary forces along with Tripura State Rifles (TSR) personnel were deployed on Wednesday in some districts that were rocked by anti-CAB violence.

The Congress has called a shutdown in the state on Thursday after party workers were injured in baton charge by the TSR when they took out a torch rally in protest against the CAB.

Indian Army officials said that two columns of Assam Rifles are deployed in Tripura. The strength of one column is about 70 personnel, including all ranks.

In Assam’s Dibrugarh, a journalist was injured who got caught in the stone pelting by a mob and the police lobbing tear gas shells to disperse the protesters near a polytechnic institute, police said.

Rubber bullets were fired and lathicharge was carried out against agitators at Moran also, police said.

In view of the fresh protests in which students from several colleges are participating, Guwahati and Dibrugarh universities have postponed examinations for an indefinite period.

The protest march at numerous locations in Guwahati brought traffic on all roads to a standstill. Hundreds of vehicles moving in and out of the city have been stranded for hours. Protesting students also forced shopkeepers to close their shops and at some places they tried to vandalise shops. However, police team chasing the protestors managed to avert any major incident.

Though no organisation had called for a bandh on Wednesday, people came out in large numbers in Jorhat, Golaghat, Dibrugarh, Tinsukia, Sivasagar, Bongaigaon, Nagaon, Sonitpur and several other districts since morning.