Referring to Modi's picture on the KVIC calendar, Sambit Patra said 'a controversy has been created over an issue which is non-issue'. 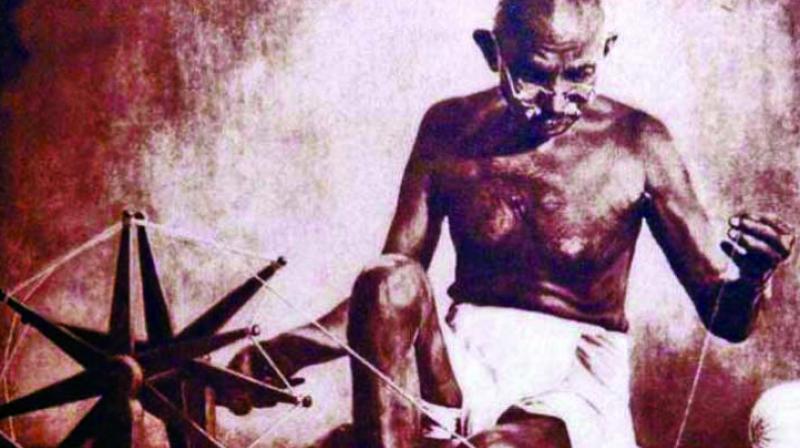 This photo of Mahatma Gandhi, taken by photographer Margaret Bourke White, is among the 100 most influential images of all time of Time magazine. (Photo: File)

New Delhi: Bharatiya Janata Party (BJP) rejected as "false" the charge that Prime Minister Narendra Modi's picture replaced that of Mahatma Gandhi in Khadi and Village Industries Commission's calendars, saying Gandhi's photo had not been used many a times in the past, and claimed Modi has promoted his philosophies while Congress used his name and photographs.

BJP spokesperson Sambit Patra said an "unnecessary controversy has been created over an issue which is non-issue" as he claimed that Gandhi's photographs were not used in KVIC's calendars and diaries in 1996, 2002, '05, '11, '12 and '13.

"This is false," he told reporters in reaction to reports and the opposition's claims that Modi had replaced Gandhi's pictures. There is no rule in KVIC that says only Gandhi's photograph should be used, he said.

Targeting Congress and its ruling family, he said their love for the Father of the Nation's picture was confined to the currency notes carrying his photo and that they "misused" his name for political purpose for all these years.

"The Prime Minister promoted Gandhi's philosophies and these are reaching every household... There is one party which ruled for years in Gandhi's name. They keep calling themselves Gandhis though they had no link with Mahatma Gandhi," he said.

The sale of khadi through KVIC, a government body tasked with its promotion, was merely 2 to 7 per cent all these years but Modi's efforts took it over 35 per cent, he said.

Modi has been promoting the values Gandhi stood for whether it is 'swachhta' or khadi, Patra said.