Mahatma Gandhi's picture on the KVIC calendar weaving khadi on a charkha wearing his trademark cloth, has been replaced by Modi's picture. 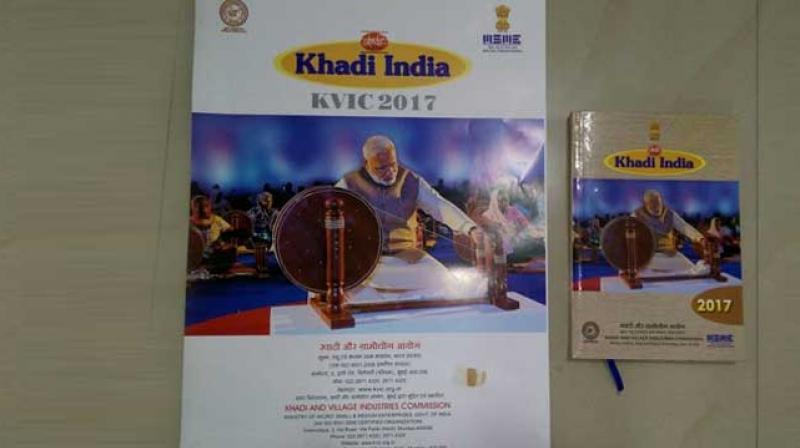 Ahmedabad: Defending the move of Khadi and Village Industries Commission (KVIC) to publish Prime Minister Narendra Modi's photo on its 2017 calendar and table diary, KVIC chairman V K Saxena said there is "no rule or tradition" that only Mahatma Gandhi's picture can be published on these items.

The explanation came amid protests from various sections of society especially Gandhians and from opposition political parties, who alleged that KVIC is trying to "replace" Mahatma Gandhi with Modi through such acts.

"I want to first ask whether anyone can replace Gandhiji? Is Gandhiji's stature so small that he can be replaced so easily? He can... never ever can be replaced. This whole controversy is unnecessary and out of the context," Saxena told PTI.

"There is no such rule or tradition that we can publish only Gandhiji's photo on our calendar or on the cover of diary. His (Gandhiji's) photo was not there in 2002, 2005,

KVIC is a statutory body established by an Act of Parliament. Saxena was appointed as Chairman of KVIC in October 2015 by the Centre.

Controversy erupted when KVIC published their calendar and diary with a photo of Modi weaving khadi on a charkha (spinning wheel).

According to Saxena, sale of Khadi has increased many fold after Modi appealed the citizens to embrace Khadi.

"During the last 10 years, the growth rate of Khadi sale was around two to seven per cent. But, after the Prime Minister's appeal, it has gone up to 34 per cent in 2015-16.

This had a direct impact on the lives of spinners, who are now getting sufficient work due to this sudden increase in demand," Saxena said.

He also said the cover photo of the Prime Minister is also "relevant to the core values" of KVIC.

"This photo was taken in Ludhiana on October 18 last year when the Prime Minister distributed 500 charkhas to women at an event. It was published in all major national as well as international newspapers. This photo itself serves as an appeal to citizens to embrace Khadi," Saxena said.

On Friday, upset over Mahatma Gandhi's picture missing on the calendar of the KVIC, a section of its workers in Mumbai staged a protest, and sought to know why the image of the father of the nation was left out, while featuring Prime Minister Narendra Modi.

In a brief protest, dozens of workers associated with the KVIC, who gathered at suburban Vile-Parle, said they were raising the issue since Mahatma Gandhi has been the driving force behind the Khadi movement.

Meanwhile, Opposition parties across the board are outraged.

"Becoming Gandhi requires years of austerities. One cannot become Gandhi by acting to spin the Charkha, this would only ridicule them," Kejriwal tweeted.

Mamata Banerjee commented: "Gandhiji is the Father of the Nation. Modi ji what???"

Rahul Gandhi called it the ‘Mangalyaan effect’, referring to his speech at a Congress event two days ago when he said, "Modi would take credit for sending the Mangalyaan if he had his way".