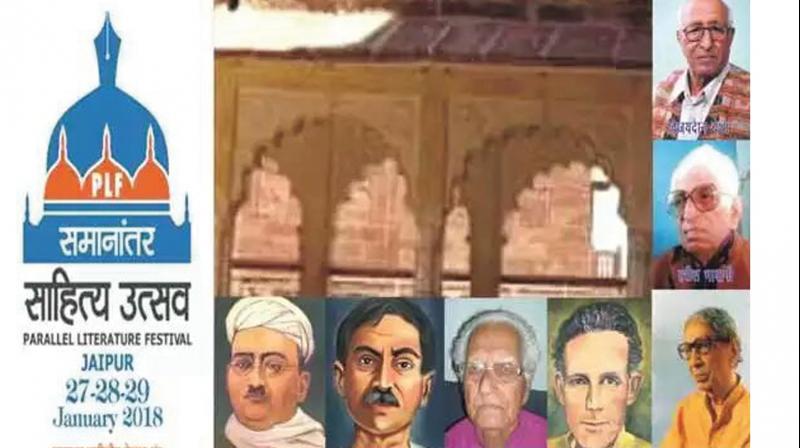 The invitation card of Jaipur’s parallel literature festival that promises to honour Hindi and other Indian languages.

Jaipur: Criticism and controversies are not new to Jaipur Literature Festival (JLF), which is described as the “greatest literary show” in the world. For the first time, it is also facing a challenge in the form of a parallel literature festival later this month, as a protest against the so-called corporatisation, elitism and offering a raw deal to Indian languages and writers.

The Rajasthan chapter of Leftwing Progressive Writers Association (PWA) has announced that it will hold a three-day “Samanantar Sahitya Utsav” (Parallel Literature Festival) from January 27 to 29. The JLF-2018 will be held from January 25 to January 29.

The idea was mooted by former additional director general and a well-known Hindi and Rajasthani poet, Krishna Dev Kalpit who termed the JLF more of a tamasha than a serious literary event.

“It is an entertainment package with a mix of celebrities from film, sports, fashion and political world. There are more socialites than litterateurs and needless discussions than serious discussion on literature. Our literature festival will be an alternative for Indian writers and poets who are ignored by the highly commercialized JLF,” Mr Kalpit said.

The PLF will highlight literary contribution of Hindi and other Indian languages and hold serious deliberations on culture, folk traditions, literary skills and literature’s role in common people’s lives.

“We will not take any money from corporate houses and our event will be modest. Writers from various languages will participate in the event. Entry will be free,” he added.

Ish Madhu Talwar, state general secretary of PWA, said that the parallel festival will have 24 sessions, including two on Rajasthani language, spread over three days.

As a mark of respect, the venue, entrance gates and stage have been named after famous Hindi and Rajasthani authors. Around 30 Marwari and Punjabi writers have also been invited.

“We are also considering a session for Indian English writers. We have no problem with any language. PLF is also a protest against neglect of non-celebrity writers and humiliation of vernacular languages by JLF,” added Mr Kalpit.

Not everyone is in agreement with him. A veteran author, who did not wish to be named, said that it was wrong to accuse the JLF of step-motherly treatment to Indian languages or criticise it as a tamasha.

“I have been attending it regularly and there have been no less than 40 to 50 vernacular writers, including some from Rajasthan.,” he claimed, adding that apart from literature one also gets a chance to listen to thought provoking debates and discussions on a wide range of topics and contemporary issues.

The JLF organisers, too, dismissed the allegation of ill-treatment to vernacular languages. “At the 11th edition, we will have over 350 speakers, with 30 writers representing Hindi. There will also be 50 other speakers, representing 15 other major Indian languages,” the statement said.

The PLF is unlikely to have a bearing on the JLF, that receives over a millions footfalls, but organising a parallel literature festival is surely a unique way of registering protest.