J&K: DSP caught with Hizb treated ‘as a militant’

Guru, a resident of Doabgah suburb of J&K’s north-western Sopore town, was hanged in Delhi’s Tihar jail on February 9, 2013. 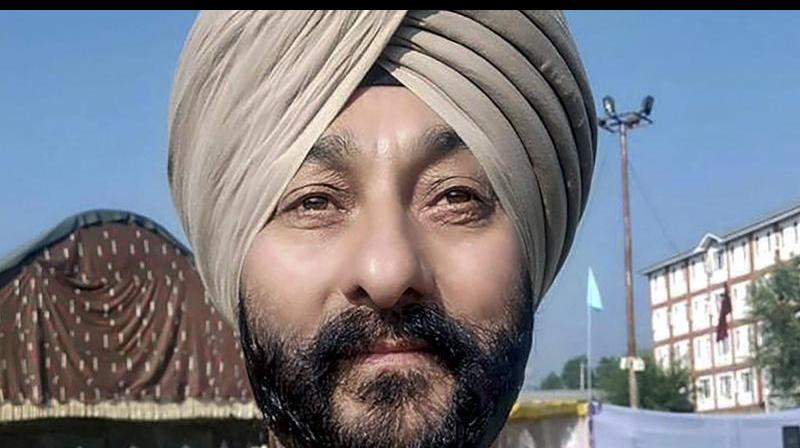 Undated photo of deputy superintendent of police Davinder Singh who was arrested along with two Hizb-ul Mujahideen militants in Kashmir Valley on Saturday, Jan. 11, 2020. (PTI Photo)

Srinagar: The Jammu and Kashmir police on Sunday said that Davinder Singh, deputy superintendent in Anti-Hijacking Squad at the Srinagar International Airport, who was arrested along with two Hizb-ul-Mujahideen militants in southern Kulgam district a day ago, is being treated as a militant.

The police further said that Singh will be questioned also about Parliament attack convict Muhammad Afzal Guru’s claim that he (the police officer) had asked him to take a co-accused to Delhi. Guru, a resident of Doabgah suburb of J&K’s north-western Sopore town, was hanged in Delhi’s Tihar jail on February 9, 2013.

The J&K police had on Saturday arrested a top Hizb commander Syed Naveed Mushtaq alias Naveed Babu alias Babar Azam and his accomplice Asif Ahmed Rather while travelling along the highway connecting Srinagar and Jammu.

Singh, who was travelling with them in a Hyundai i20 car, was also taken into custody for ‘questioning’. The police recovered five hand-grenades from the possession of the arrested militants and subsequently an AK-47 rifles and two pistols during a raid at the police officer’s house in Srinagar’s high-security Shivpora area.

Inspector General of Police (Kashmir range) Vijay Kumar at a press conference here on Sunday confirmed the arrest of Singh and said that he was involved in a heinous crime for which he will be treated like other militants. He said that another person, a lawyer by profession but working as an over-ground worker of militants, has also been apprehended. The police sources identified the lawyer as Irfan Shaffi Mir of Shopian district.

Singh is a decorated police officer who has served “valiantly and productively” in the J&K police’s counterinsurgency Special Operations Group (SOG) for many years. He was some time back awarded the President’s medial for bravery.

Acknowledging this, the IGP said, “This police officer has worked in many anti militancy operations but the way he was captured yesterday…It is a heinous crime. That is why we have treated him like other militants”.

He added, “We’ve arrested him formally and brought him on remand. The interrogation is going on”. Singh and the militant duo were taken to an unknown destination immediately after the car they were travelling in was intercepted by a police party headed by an officer of IGP’s rank between Mir Bazaar and Wanpoh stretch of the highway in Kulgam district on Saturday morning. The police sources said that the preliminary investigations revealed that the trio was on their way to Delhi. Singh was absent from duty on Saturday and had applied for four days’ leave from Sunday, the sources said.

The sources also said that the police was tracking Naveed Babu’s movements and his location was traced after he made a phone call to his brother. After the interrogation of the police officer and the militants, the police carried out multiple raids in Srinagar and south Kashmir. While an AK-47 rifle and two pistols were recovered from the police’s officer’s Srinagar residence, another AK rifle and a pistol were found at a militant hideout in south Kashmir on Naveed Babu’s confession.

The police said that Naveed Babu, a former Special Police Officer who decamped with more than one assault rifles from central Kashmir’s Budgam district in 2017, was wanted by it for his involvement in the killing of eleven civilians in various incidents in south Kashmir where he was “very active” for past some time.

Naveed Babu, the police said, had joined the Hizb in 2017 itself.

The IGP said that Naveed Babu has been involved also in killing of policemen and torching many apple orchards and threatening farmers and other people following the abrogation of Article 370 in August last year. “He was the most wanted for us and HM’s commander of district Shopian. He is HM’s second in command after its chief Riyaz Naikoo,” the officer said adding that he (Naveed Babu) was involved in a series of post-August 5, 2019 attacks on non-local labourers, truck drivers and apple merchants with the aim of driving the non locals out of Valley.

Replying questions, IGP Mr Kumar said that the interrogation of Singh by the J&K police, its CID wing, the Intelligence Bureau and the Research and Analysis Wing (RAW) is underway.

Guru had in a letter to his lawyer claimed that Singh had asked him to take Muhammad, a co-accused in the Parliament attack, to Delhi and arrange his stay there.

Asked about Guru’s claim, Mr. Kumar said, “There’s nothing in my records but what you are saying will also be asked (to) him during the interrogation.”

A journalist told the IGP that Singh had in an interview to him some years back admitted that he had tortured Guru and that in order to save himself from more torture he (Guru) was asked to do “one last work” in Delhi. The Valley’s police chief evaded a direct answer to this but reiterated that Singh would be interrogated about Guru’s claim as well.