The police has also asked JNU student Akshat Awasthi along with his colleague Rohit Shah to join the probe. 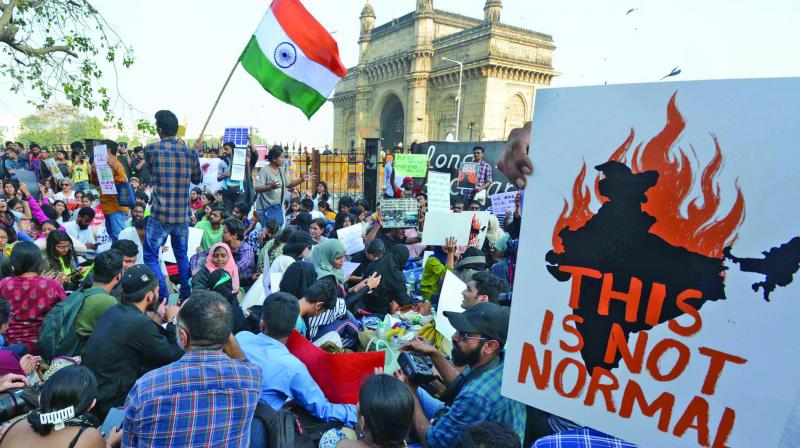 People protest against the alleged attack on JNU students at Gateway of India on Monday. (Photo: Debasish Dey)

New Delhi: The Delhi police has identified seven more of the 60 people — from a WhatsApp group — from several videos and photos that went viral on the social media in the JNU violence case. The police has also recorded statements by a warden, 13 security guards and five students over the campus violence in which masked goons attacked the students and faculty, leaving 34 people injured.

The police has come under severe criticism for acting as mute spectators when the brutal attack was unleashed by goons on students and the faculty at the campus.

Former Delhi police commissioner Neeraj Kumar has said, however, that had he been in command of the force, he would have sought intelligence and intervened “at any appropriate time” to prevent the situation escalating at the university campus.

“The administration kept seeing the situation; that was wrong. The police could have acted even without the vice-chancellor”s request,” Mr Kumar said. “More important, the special branch and local police, which  was aware of how things were happening over the past few days, should have foreseen events and based on its own reports it could have intervened,” he said.

Asked what he would have done differently had he been police commissioner, Mr Kumar said: “I would have pressed my special branch into service and asked it to develop intelligence and at any appropriate time, I would have intervened and prevented the incident. No one could have faulted me for that.”

A day after the police identified 37 out of 60 members of a WhatsApp group, Unity Against Left, the police on Sunday identified seven more people for the violence on the campus. Sources said none of the seven identified persons belong to either leftist or rightist outfits.

Earlier, the police had identified four other students who were in favour of the semester registration process and wanted to enrol themselves for the new academic year.

The police has also asked JNU student Akshat Awasthi along with his colleague Rohit Shah to join the probe. Akshat was caught on camera by a television channel saying that the RSS-backed Akhil Bharatiya Vidrarthi Parishad (ABVP) students were behind the brutal attack. A first-year student of the French degree programme at JNU, Akshat Awasthi identified himself in the footage of Sunday’s attack as an ABVP activist. Another student, Rohit Shah, too had confessed on camera that 20 ABVP activists from JNU were involved in Sunday’s attack.

It is learnt Akshat could visit the police station but in all probability not join the probe. Earlier, the ABVP had distanced itself from the two students, Akshat Awasthi and Rohit Shah, claiming the two were not its members.