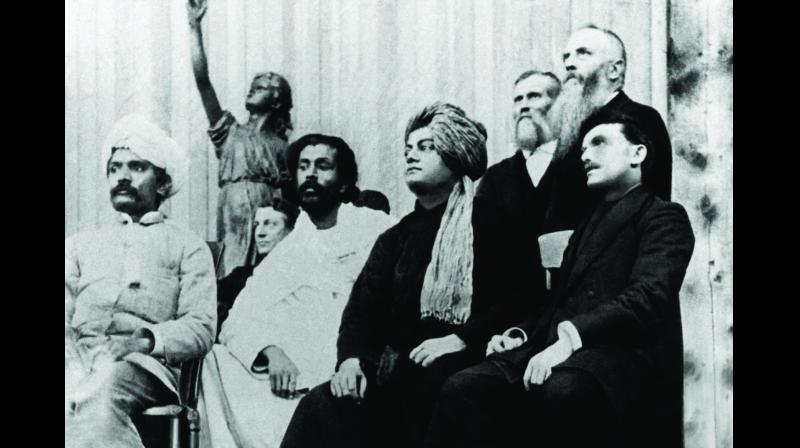 A file photo of Swami Vivekananda at the Parliament of Religions in Chicago in 1893.

We have just commemorated the 126th anniversary of Swami Vivekananda’s address to the Parliament of the World’s Religions held in Chicago in 1893. He along with his master, Sri Ramakrishna, have been described as the Mozart and Beethoven of the eternal symphony of the Vedas, reinterpreting these ancient Hindu scriptures for present-day humanity. Soon after the spectacular success in Chicago, Swamiji met Sarah Farmer, an American philanthropist who shared his vision for creating a “universal” religion and later became a member of the Baha’i faith. However, spirituality was not a mere epiphenomenon of larger historical developments, as advocated by them. Rather, the “transformation” they sought would come from a fusion of “Eastern wisdom” with practical Western pluralism that contrasted spirituality with materialism, tolerance with intolerance, transcendence with instrumentalism. The Baha’i faith, which was mentioned at the Chicago Parliament of the Religions for the first time in North America, gained foothold .in 1894 with the advent of a few pioneers. It got tremendous impetus through the visit of Abdu’l-Baha, son of Baha’u’llah, in 1912. It seems to me that during his nine months of travel in Canada and the US to raise awareness of the oneness of humankind and unity of religions, there is much that one may find of what Vivekananda wanted not only for our country, but for the whole world. At the Parliament Swamiji proclaimed “…if there is ever to be a universal religion, it must be one which will have no location in place or time, which will be infinite, like the God it will preach, and whose sun will shine upon the followers of Krishna and of Christ, on saints and sinners alike; which will not be Brahmanical or Buddhist, Christian or Mohammedan, but the sum total of all these, and still have infinite space for development; which in its catholicity, will embrace in its infinite arms, and find a place for every human being, from the lowest grovelling savage, not far removed from the brute, to the highest man, towering by the virtues of his head and heart almost above humanity, making society stand in awe of him and doubt his human nature. It will be a religion which will have no place for persecution or intolerance in its polity, which will recognise divinity in every man and woman, and whose whole scope, whose whole force, will be centred in aiding humanity to realise its own, true divine nature.”

To this end, the teachings of Baha’u’llah as propagated by Abdu’l-Baha during his travels in the West abundantly complement the eternal spiritual truths enshrined in the gospel of Sri Ramakrishna as preached by Vivekananda. The Baha’i faith stresses it is important to break down the barriers that cause divisions in society. Every society in the world has to work on this. In the United States, this may mean the breaking down of racial prejudices; in Britain it may mean the breaking down of class barriers; in India, one of the major problems that divides society is the caste system, jati. Of this, Vivekananda had warned: “The idea of caste is the greatest dividing factor... all caste either on the principle of birth or of merit is bondage. The Baha’i writings emphasise that we must put behind us these prejudices and social barriers and work towards a united society.”

“The tabernacle of unity hath been raised;” Baha’u’llah proclaimed, “regard ye not one another as strangers. Ye are the fruits of one tree, and the leaves of one branch…” To the degree that the peoples and nations of the world accept the emerging reality of universal dharma anchored upon the “consciousness of oneness” and work to create the necessary instruments and institutions, to that degree will they be able to reconstruct their own societies and contribute substantially to the coming divine world civilization, which is the ideal and fulfilment of Sanatana Dharma. In the words of Vivekananda, “…practical Advaitism which looks upon and behaves towards all mankind as one’s soul,,,”

The writer is a social worker and an independent scholar