Sasikala also said it was Panneerselvam, who asked her to take charge after Jayalalithaa's death. 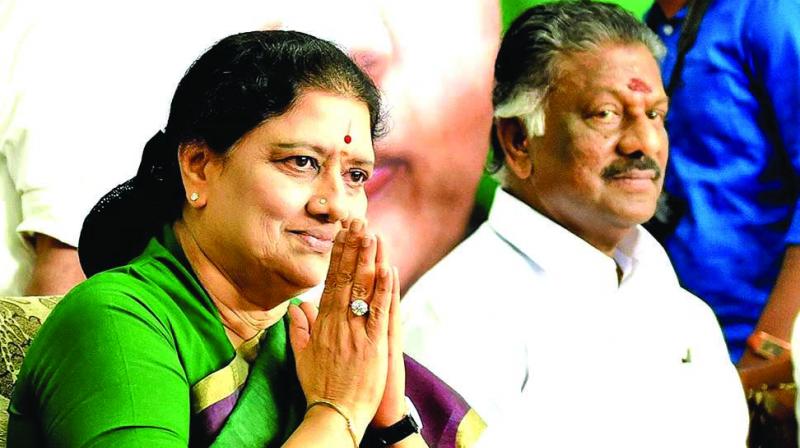 Chennai: As the power struggle within the All India Anna Dravida Munnetra Kazagham (AIADMK) continues to plague the political ambience in Tamil Nadu, party general secretary V.K. Sasikala on Monday declared she is not scared of acting Chief Minister O. Panneerselvam or anybody who hatches a conspiracy to divide the party.

"We have seen 1000 such 'Panneerselvams'. For the past 33 years, we (she and late J. Jayalalithaa) both have seen everything. So, I am not scared," Sasikala said while addressing the media outside her Poes Garden residence, hours after a caveat was filed in the Supreme Court by G.S. Mani, the advocating for Satta Panchayat Iyakkam.

Sasikala and Panneerselvam have been in an extensive race to outwit each other in the political battle of Tamil Nadu's chair of power.

"When Amma passed away, I came to know about a conspiracy being hatched to divide the party," she added while training her guns at Panneerselvam.

Sasikala also said it was Panneerselvam, who asked her to take charge after Jayalalithaa's death.

"Since I denied then, he was given the responsibility," she added.

Dubbing Panneerselvam as 'betrayer', Sasikala quipped, "His true colours can be seen now."

Sasikala had earlier accused Panneerselvam of trying to create a rift within the party and asked the workers to ensure that the government formed under later chief minister Jayalalithaa is kept alive.

Meanwhile, the number of AIADMK MPs and MLAs joining Panneerselvam's camp has been on a constant rise.

In the 235-member Tamil Nadu Assembly, the AIADMK has 135 MLAs. If Panneerselvam is able to garner the support of 18 MLAs, Sasikala will not be able to form the government on her own.

Earlier on February 5, Sasikala was elected as the party's legislature leader, a step towards her elevation as chief minister of Tamil Nadu. This, however, triggered a political stalemate in the state with both camps calling on Governor Ch. Vidyasagar Rao to press their demand to invite them to form the government.