The blast occurred when a team of CRPF's 212th battalion was patrolling in a forest in Kistaram area of Sukma. 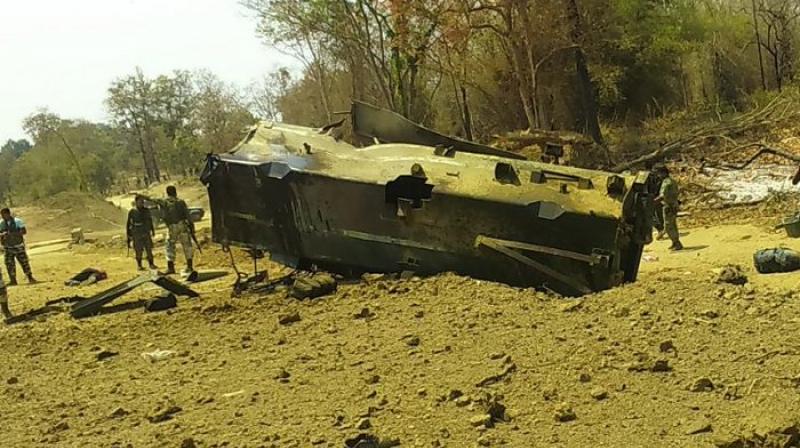 The rebels used a lot of explosives to blow up the vehicle. (Photo: ANI/Twitter)

Raipur: Nine personnel of the Central Reserve Police Force (CRPF) were killed and a few others injured when suspected Maoists blew up their mine-protected vehicle (MPV) in Chhattisgarh's Sukma district on Tuesday, an official said.

The blast occurred when a team of CRPF's 212th battalion was patrolling in a forest in Kistaram area of Sukma, located around 500 kms from here, a paramilitary official told PTI.

"Eight paramilitary personnel, belonging to the 212th battalion, were killed in the blast," he said.

The security men were conducting an area-domination operation in the forest of Kistaram when the Maoists blew up the CRPF's mine-protected vehicle, he said.

The rebels used a lot of explosives to blow up the vehicle, the official said. Soon after the incident, reinforcement was rushed to the spot, he said, adding that further details were awaited.

The attack comes almost 11 months after 25 CRPF jawans were killed by a gang of nearly 300 Naxals at a construction site in Sukma.

Then Union Minister M Venkaiah Naidu had termed the attack as a “classic case of mindless killing”.

12 jawans of the CRPF were killed in the same district in March last year.

However, state Home Minister Ramsewak Paikra told the state Legislative Assembly in February that as many as 300 Naxals were reportedly killed in separate encounters with security forces in Chhattisgarh in the last two years.