Voting will be held on March 23 and the last date for withdrawal of candidature is March 15. 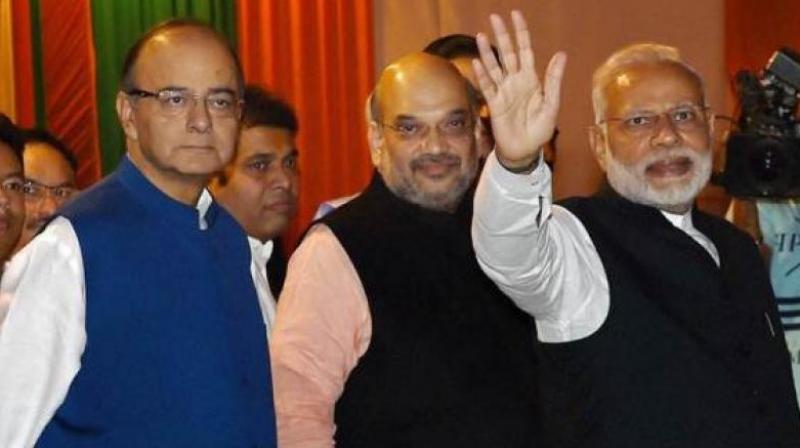 In the 245-member Upper House of Parliament, Uttar Pradesh has 31 seats being the most populous state of the country. (Photo: PTI/File)

Lucknow: With 14 candidates, from Union Finance Minister Arun Jaitley and other bigwigs to an independent, entering the fray for ten vacant Rajya Sabha seats from Uttar Pradesh, a contest to the Parliament's Upper House became imminent on Monday.

"As many as 11 BJP candidates and an independent filed their nomination papers today. This takes the total number of candidates in the fray to 14, with SP's Jaya Bachchan and BSP's Bhimrao Ambedkar having already filed nominations earlier," returning officer Poonam Saxena said.

Monday was the last day for filing of nominations for the biennial elections. Voting will be held on March 23 and the last date for withdrawal of candidature is March 15.

UP BJP vice-president JPS Rathore said, "The party has fielded 11 candidates for the ongoing Rajya Sabha elections from UP. Let's see what happens."

BJP candidate and UP general secretary Salil Bishnoi, when contacted said, "As per the orders of my party leadership, I have filed my nomination papers. Whatever the party instructs me to do in future, I will abide with it."

There was speculation that the BJP may ask some of its leaders to withdraw from the contest. In this contest, a candidate needs 37 first preference votes to emerge victorious.

Arithmetically, the BJP can easily win eight out of the 10 seats. The party and its allies have 324 seats (BJP's Noorpur MLA died recently in a road accident) in the 403-member Assembly.

In the 245-member Upper House of Parliament, Uttar Pradesh has 31 seats being the most populous state of the country.

Earlier on Monday, Jaitley filed his nomination papers for the Rajya Sabha election from UP. Chief Minister Yogi Adityanath was not present during Jaitley's nomination as he was in Varanasi and Mirzapur for Prime Minister Narendra Modi's visit. Jaitley filed his nomination papers at the Tandon Hall of the Uttar Pradesh Assembly complex in the presence of UP BJP chief Mahendra Nath Pandey, deputy chief ministers Keshav Prasad Maurya and Dinesh Sharma, UP cabinet ministers Shrikant Sharma and Anupama Jaiswal, and other leaders.

Speaking to reporters, UP Deputy Chief Minister Dinesh Sharma said, "If you see our list of Rajya Sabha candidates, all the regions have got representation on the basis of merit. This is the speciality of the BJP."