The apex court passed slew of directions granting relief to the farmers whose land were acquired and later taken by the builders. 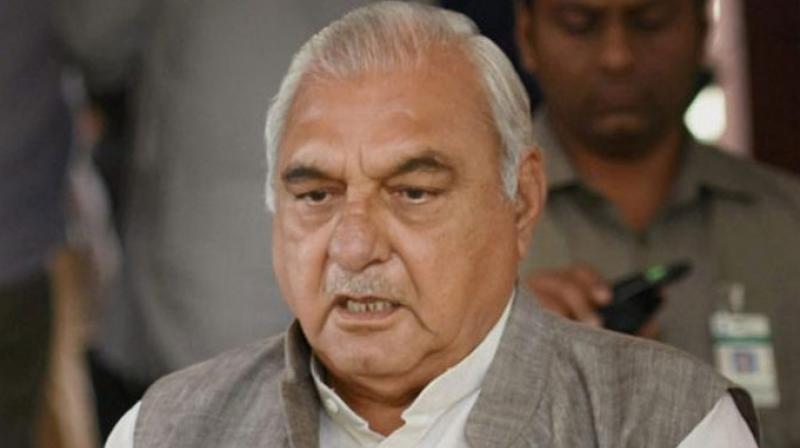 The top court said that the public interest was not the underlying concern or objective behind those decisions dated August 24, 2007 and January 29, 2010 but the motive was to confer undue advantage on the builders/private entities. (Photo: PTI/File)

New Delhi: The Supreme Court on Monday set aside two orders of the erstwhile Bhupinder Singh Hooda government in connection with land acquisitions in adjoining areas of Gurgaon in Haryana terming the decisions "nothing but fraud on power".

The apex court verdict came on plea which related to the land acquisition done by the Haryana government by its August 27, 2004 notification, for acquiring lands measuring about 912 Acres from three villages namely, Manesar, Lakhnoula and Naurangpur of Gurgaon district for setting up Chaudhari Devi Lal Industrial Township.

On February 26, 2005, 224 acres of land was released from acquisition by the government but builders approached the farmers for purchase of their land at throwaway prices.

Just two days before the pronouncement of award for the land acquired by the government on August 26, 2007, an order was passed on August 24, 2007 dropping the acquisition.

The builders who had purchased the land from farmers later approached the government for licence to build housing societies and they were subsequently granted the approvals.

The top court said the "inescapable conclusion" was that there was an "unholy nexus" between the government machinery and the builders and private entities in devising a modality to deprive the "innocent and gullible landholders" of their land holdings and jeopardise the public interest, which the acquisition was intended to achieve.

A bench of Justices Adarsh Kumar Goel and UU Lalit said two decisions taken on August 24, 2007 and January 29, 2010 with regard to dropping of acquisition and closing of proceedings respectively were taken to "confer advantages and benefits upon the builders/private entities rather than to carry out or effectuate public purpose".

"The record indicates that various entities including certain 'middlemen' cornered unnatural gains and walked away with huge profits taking the entire process of acquisition for a ride. Substantial sums have exchanged hands in the form of settlement money," Justice Lalit, who penned down a 97-page verdict for the bench, said.

"The transactions so entered into between the landholders and the concerned builders/ private entities could not be said to be voluntary and free from any influence. The unnatural and unreasonable bargain was forced upon the landholders by creating façade of impending acquisition," it said.

The top court said that the public interest was not the underlying concern or objective behind those decisions dated August 24, 2007 and January 29, 2010 but the motive was to confer undue advantage on the builders/private entities.

"It is clear that considerations other than those which were required to be bestowed, guided the exercise of power in arriving at decisions dated August 24, 2007 and January 29, 2010. The inescapable conclusion, therefore, is that there was an unholy nexus between the government machinery and the builders/private entities in devising a modality to deprive the innocent and gullible landholders of their holdings and jeopardise public interest which the acquisition was intended to achieve," it said.

The top court passed various directions including in connection with the transactions entered into between landholders and the builders and private entities concerned in the present case were not voluntary and were brought about by fraudulent influence.

"Certain 'middlemen' and builders enriched themselves at the expense of the landholders and public interest which was to be achieved by acquisition," it said.

The court said that the decisions dated August 24, 2007 and January 29, 2010 as well as entertaining of applications for grant of licence for building housing societies from those who had bought the lands after the acquisition was initiated, were not bonafide exercise of power by the state machinery.

"The exercise of power under the Act was guided by considerations extraneous to the provisions of the Act and as a matter of fact, was designed to enrich the builders/private entities. These decisions were nothing but fraud on power," it said.

The bench said wherever there has been fraud on power, the duty of the court was not only to set aside such exercise of power but to see that there was no unjust enrichment directly or indirectly as a result thereof and there was full and substantial restoration.

The apex court passed slew of directions granting relief to the farmers whose land were acquired and later taken by the builders.