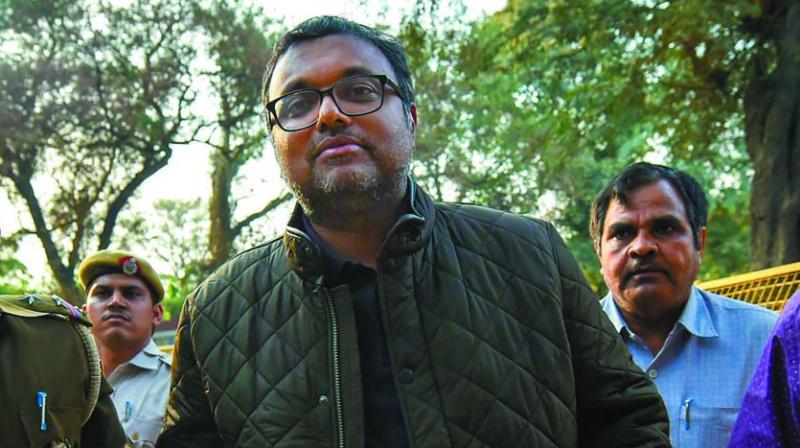 Special judge Sunil Rana sent Karti Chidambaram to judicial custody after the CBI, in whose custody he was questioned for the last 12 days following his arrest on February 28 from Chennai, said he was no longer required for custodial interrogation.

The trial court also dismissed his plea for an urgent hearing on his bail application and rejected his contention that there was a threat to his life as his father, as a Union minister in the previous UPA government, had handled several sensitive issues.

The special court said his bail application will  come up for hear it on March 15.

A two-judge bench of Acting Chief Justice Gita Mittal and Justice C. Hari Shankar said that the bail matter will be heard on Tuesday.

The former Union minister’s son was arrested on his return from the United Kingdom in connection with an FIR lodged on May 15 last year. The FIR alleged irregularities in a Foreign Investment Promotion Board (FIPB) clearance given to INX Media for receiving Rs 305 crore from overseas in 2007 when his father was a minister.

The CBI had initially alleged that Karti Chidambaram received Rs 10 lakh bribe for facilitating the FIPB clearance to INX Media for receiving foreign funding. It  later revised the figure to $1 million  (about Rs 6.50 crore at the current exchange rate and Rs 4.50 crore in 2007).

Fresh evidence in the case, which triggered Karti Chidambaram’s arrest, is based on a statement of Indrani Mukerjea, former director of INX Media, who recorded it under Section 164 of the CrPC before a magistrate on February 17.