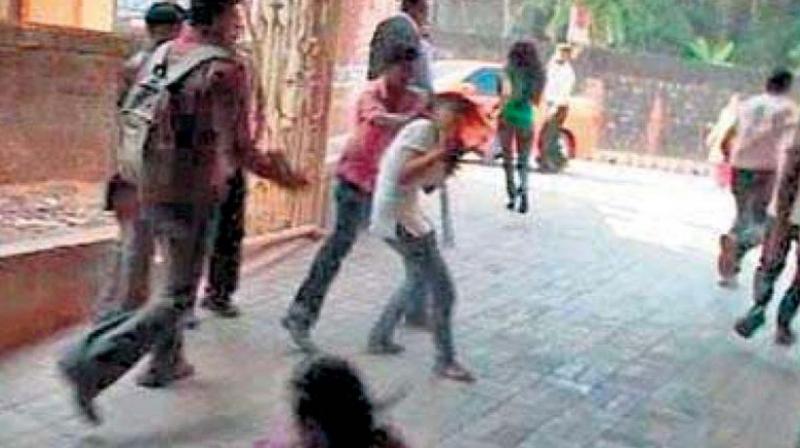 This assault had drawn the attention of the world and the video clippings and photos had gone viral on social media and the media. (Photo: File)

Mangaluru: A local court has acquitted all the 26 accused including Sri Rama Sene leader Pramod Muthalik in the infamous Mangaluru pub attack on Monday.

On January 24, 2009 Sri Rama Sene activists allegedly stormed ‘Amnesia- the Lounge,’ pub at Balmatta in Mangaluru and assaulted the youngsters, both male and female who were there.

This assault had drawn the attention of the world and the video clippings and photos had gone viral on social media and the media.This was the first major incident of 'moral policing' in Dakshina Kannada district and had attracted criticism from across the country.

The police had arrested those involved in the incident and a case was filed against 30 people. While Prasad Attavar was arrested along with his associated within a few hours of the incident, Sri Rama Sene leader Pramod Muthalik was arrested after a few days.

Nine years after the incident, the second JMFC court which tried the case pronounced the judgement on Monday acquitting all the 26 accused. Though the case has 30 accused, two are abroad and two have died. Thus the court pronounced the judgement for the 26 accused. Though the videos and photos of the attack went viral, all the accused were acquitted by the court as the complainants, including male victims and eyewitnesses did not support and turned hostile. Thus all the accused were acquitted due to lack of evidence.

The judgement was delivered on Monday by Magistrate Manjunath R. Sweets were distributed and crackers busted by the activists after the court pronounced its order.

"Cases were filed against us under nine different sections. There were 30 accused and 27 witnesses. However no girl had filed any complaint against us. My entry to Mangaluru was banned by the administration which I got removed through the court order," Muthalik said.

"If anybody is attacked by BJP workers or Congress workers in Mangaluru will the police arrest Yeddyurappa or Parameshwar? My arrest was done purposely to torture me and I condemn this," he said and added that he would discuss with the lawyers about filing defamation case.

"This incident got much publicity throughout the world. I had also apologized for the incident. There was no purpose to attack anybody. Eight complaints were filed with the police against the pub as nothing was done our activists received complaint from the local residents that the pub was a center for illegal activities. As it was being done in public place, our people had gone there to question and oppose the pub and bar culture when one girl raised an argument by showing her sandals. The argument turned into confusion resulting in the incident which should not have occurred. I had apologized then for this incident. We don't support any attack. Our organisation never indulged in any such incident after this," Muthalik said

Muthalik claimed that after the 2009 incident, there was much awareness against pub culture. "We just wanted to create awareness against the pub, bar culture that is spoiling our youths. I feel there has been good awareness. About 80 college girls have written to us supporting the 2009 incident. After the incident 70 illegal pubs were closed. But the irony is that a new pub has emeged in the same place where Amnesia once operated. This has political support," he said.

Muthalik agreed that the 2009 incident had brought both positive and negative name to him. "If there were some who feared and opposed me, there were many who supported us. Sri Rama Sene was started in 12 states after this incident," he said and declared that his organisation would continue to fight against the pub, bar culture legally even in the future days.