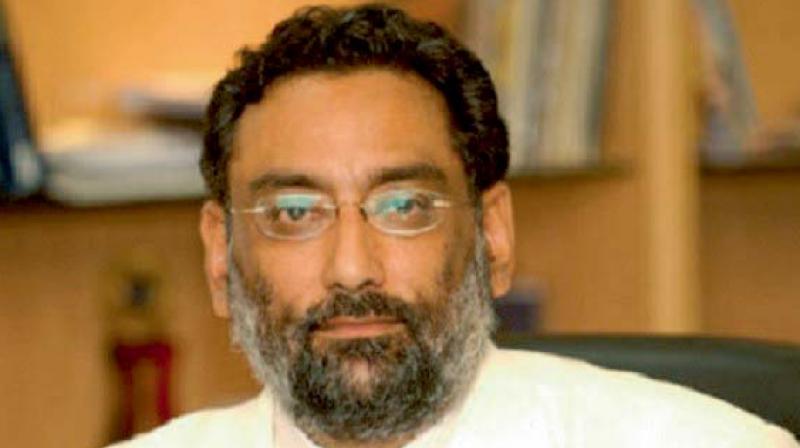 Srinagar: Jammu and Kashmir’s ruling Peoples’ Democratic Party is taking a tough stand on senior party leader and minister for finance. The reason for this was Dr Haseeb A. Drabu’s assertion that Kashmir is not a political issue but “a society with social issues” has decided to drop him from the State Cabinet.

The party sources said that the PDP led by chief minister, Mehbooba Mufti, has already shot a letter to the governor, N.N. Vohra, informing him about the decision.

The decision, the party sources said, was taken soon after the chief minister came to Srinagar from Delhi and discussed the issue with her senior party leaders.

Mr Drabu had while speaking at an event themed ‘Kashmir: The Way Forward’ held in New Delhi at the weekend reportedly said that people need to introspect over nature and origins of situation in the state and how it can be resolved. He was quoted in media as saying, “Don’t see J&K as a conflict state and a political issue, it is a society which has social issues right now. We are trying to find our own space and we are going through a process which many other countries are also going through”. Though he had later sought to clarify that he had said that Kashmir was not only a political issue but also a society with social issues and blamed “misreporting” on a “cub reporter” of a national news agency, the sources said that the party leadership assessed the video and audio coverage of his speech and found it contrary to his claim. Mr Drabu’s remarks had evoked sharp criticism from within the PDP and also by opposition National Conference and other mainstream political parties from Kashmir besides the separatists and social and trade organizations. On Sunday, the PDP had asked him to explain his statement.

They called the statement which was “contradictory” to its stand. The party’s vice-president Sartaj Madni had asked Mr Drabu to retract the statement immediately.

Other party leaders had publicly admitted that Mr Drabu’s remarks have caused a huge embarrassment to the PDP whose fundamental position is that Kashmir is a political issue, which should be addressed to politically to put an end to the turmoil in the State. Madni had after seeking explanation from Mr Drabu reiterated the PDP’s standand said it “recognises Jammu and Kashmir as a political issue and ever since its advent the party has relentlessly been pursuing its resolution through reconciliation and dialogue, both at internal and external levels”.