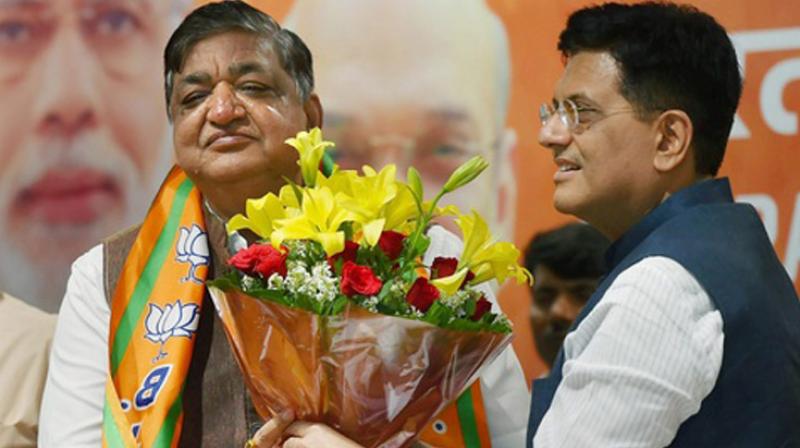 New Delhi: A day after issuing a statement while joining the Bharatiya Janata Party (BJP) and bidding adieu to Samajwadi Party (SP), Naresh Agrawal on Tuesday has expressed his "regret" for his comment disparaging actor-politician Jaya Bachchan as someone "who used to dance in films".

"I had said something which was given a different angle by the media. All I can say is that I didn't intend to hurt anyone. I express my regret, if it did hurt anyone. I take back my words, " Naresh Agrawal told media. Asked whether he was apologising, the politician shot back, "Do you understand the meaning of khed (regret)?"

In his initiation ceremony at the BJP headquarters in Delhi on Monday, Naresh Agrawal said he was humiliated by the SP as he lost the Rajya Sabha election ticket to Jaya Bachchan.

"My status was reduced to that of a film actor. Because of her, the ticket (for Rajya Sabha) was not given to me, which I did not find right," Naresh Agrawal said.

Senior BJP leader and Foreign Minister Sushma Swaraj tweeted: "Naresh Agrawal has joined BJP. He is welcome. However, his comments regarding Jaya Bachhan ji are improper and unacceptable."

Re-tweeting the comment, Information and Broadcasting Minister Smriti Irani posted that "when a woman's honour is challenged we stand as one in our condemnation irrespective of our politics."

Naresh Agrawal was also criticised by his former boss and Samajwadi Party Chief Akhilesh Yadav, with whom he was very close once. "We condemn Naresh Agrawal. This is not just an insult to actors but also Indian women," Akhilesh Yadav said.

BJP spokesperson Sambit Patra had distanced his party from Naresh Agrawal's remarks, saying it respects people from all fields and welcomed them in politics.

Naresh Agrawal, who has also had a stint in the Congress, is not new to controversy. In 2017, he was criticised by the BJP over his remarks in the Rajya Sabha mocking Hindu gods.