After Pulwama: The good, the bad and the ugly

But the February 14 attack had not merely been a heinous one. 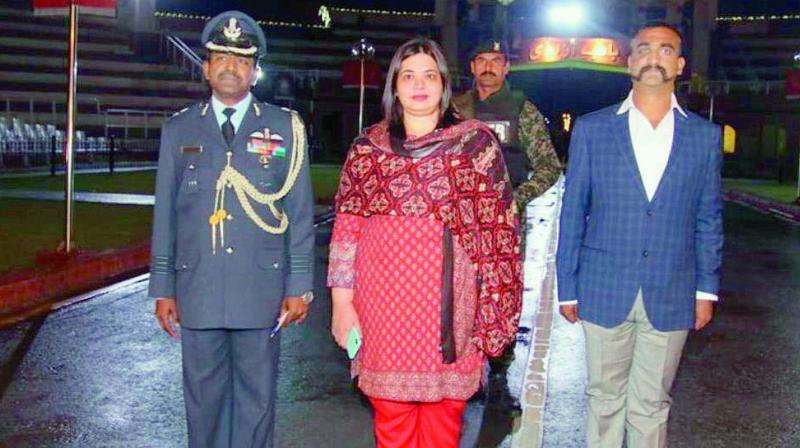 Wing Commander Abhinandan Varthaman (extreme right), accompanied by Group Captain Joy Thomas Kurien, India’s air attache at the high commission in Islamabad, and Dr Fariha Bugati of the Pakistan foreign office, prepares to cross the Wagah-Attari border on February 28 on his way home on being freed from two-day captivity in Pakistan after his MiG-21 Bison fighter was shot down. (Photo: PTI)

Pakistan’s directors of anti-India terror may never have imagined that killing over 40 personnel of Central Reserve Police Force (CRPF) by ramming a car with 350 kg of explosives into the bus, part of a large security convoy, they were travelling in on the Srinagar-Jammu national highway in Kashmir’s Pulwama district would spiral into an all-India outburst of anger and a debilitating air attack on its terrorist bases.

But the February 14 attack had not merely been a heinous one. It had been yet another covert act of war on the part of the enemy. Claimed by Pakistan-supported terror group Jaish-e-Mohammad (JeM), this was the biggest attack on security personnel in J&K in decades. In 2001, three terrorists of JeM had attacked the J&K state assembly in Srinagar using a Tata Sumo loaded with explosives, killing 38 people.

The tally of Pakistani/Pakistan-supported Kashmiri terrorists killed by Indian Army and security forces in Kashmir Valley in 2018 — at almost 250 — was high. And a large number of those killed, including many of its commanders, belonged to JeM. This was why JeM resorted to using an improvised explosive device (IED) which, with or without a suicide bomber, is a far more failsafe method of achieving its destruction target.

Over the next few days, the extensive media coverage of the mortal remains of these unfortunate paramilitary soldiers being escorted to their respective home destinations and the processions and funeral ceremonies being spontaneously joined by citizens, many of them shouting slogans hailing them as martyrs and crying Pakistan murdabad (death to Pakistan) showed how deeply the attack had impacted the general public. Television interviews of various next-of-kin of the troops also reflected the desire for revenge of the people.

Prime Minister Narendra Modi and Union Home Minister Rajnath Singh, too, expressed that this attack would elicit a strong response. The Indian government threatened to deny Indus water share to Pakistan. India’s diplomatic offensive was also put into top gear. While many nations condemned the attack, efforts were renewed to move the United Nations Security Council on declaring Masood Azhar as a global terrorist. India revoked Pakistan’s most favoured nation status. The customs duty on all Pakistani goods imported to India was raised to 200 percent. The government of India urged the Financial Action Task Force on Money Laundering (FATF) to put Pakistan on the blacklist.

Protests bandhs and candlelight marches were held all across India. The Indian community in the United Kingdom held protests outside the Pakistan High Commission in London. A delegation of Indian doctors cancelled their visit to Pakistan for the 13th Association of Anaesthesiologists Congress, organised by the South Asian Association for Regional Cooperation, in Lahore on March 7. Indian broadcaster DSport said it would no longer broadcast Pakistan Super League cricket matches. The All Indian Cine Workers Association and Indian Film and Television Directors’ Association announced a ban on Pakistani actors and artistes in the Indian film industry, and stated that strong action would be taken on any organisation violating it.

While an important and far-too-long overdue step of revoking security and some other facilities to Kashmiri separatists has been taken and some top operators and many lower level liabilities have been arrested, till all separatists and their entire network are not put behind bars in states other than J&K, terrorism in and related to Kashmir will not end.

Twelve days after the Pulwama attack, on February 26, the Indian Air Force (IAF) launched a pre-dawn, precision bombing strike on terrorist bases in Balakot in Pakistan’s Khyber Pakhtunkhwa as well as Muzaffarabad and Chakoti in Pak-occupied Kashmir resulting in destruction of the three. It is a befitting tribute to not only the dead CRPF personnel but also those of the Indian Army and state police force killed in various terrorist attacks in Kashmir.

The BJP reportedly asked party leaders to maintain restraint in their reactions and project the move not as a revenge for the Pulwama terror attack but as a pre-emptive strike at terror camps at a time when JeM was preparing for a series of suicide attacks on Indian soil.

On February 27 morning, India’s air defence system was on full alert. Noticing a build-up of Pakistan Air Force (PAF) aircraft on the other side of the Line of Control, additional aircraft effectively engaged PAF aircraft attempting to attack Indian Army locations. IAF’s Mirage-2000, Sukhoi-30 and MiG-21 Bison aircraft were involved in the engagement. PAF aircraft were forced to withdraw in a hurry, which was also evident from the large distances by which weapons dropped missed their intended targets. PAF’s F-16s, supplied by the US for use against terrorists in Pakistan, were used by PAF for multiple launches of the AMRAAM missile. Prompt action by IAF’s Su-30s in response to PAF’s AMRAAM launch, defeated the missile, parts of which fell in the area East of Rajouri in J&K, injuring a civilian on the ground. A detailed report released by IAF and all the Su-30 aircraft engaged in combat landing safely back, nailed Pakistan’s lie of PAF shooting down a Su-30. This false claim was made by Pakistan to try to cover up for the loss of its own aircraft downed by the courageous Wing Commander Abhinandan Varthaman, flying a MIG 21 Bison.

Abhinandan’s ordeal followed. His aircraft was hit, he bailed out, fell into Pak territory, got roughed up by locals and was eventually seized by Pak army. A foreign newspaper reported: “A series of videos were released showing him being beaten by a mob near his crash site and then interrogated by Pakistani officers while blindfolded and wearing a bloodied uniform. He gave his name, rank and religion, but when prompted for more information, calmly replied: “I’m sorry, sir, that’s all I’m supposed to tell you.” The footage was widely circulated on WhatsApp and social media…”

His repatriation, for which a huge crowd gathered to greet him on the Indian side of the Indo-Pak border check posts at Wagah, was delayed many hours without explanation by Pakistani authorities. A most likely reason for the delay was the large cheering crowd. Before being released after 9 p.m. he was made to stand short of the border check post gate on the Pakistani side for quite a while with the Indian Air Attache, Group Captain Joy Thomas Kurien, and Dr Fariha Bugati, a Pakistan Foreign Service official. Dressed in “civvies”, he stood erect and walked steadily, belying his injured condition. Following a meeting with his family, he was taken for a procedural medical check-up to Army Hospital, Delhi Cantonment, where he is still admitted for treatment of compression of the spine and injury to his ribs. The “Abhinandan moustache” has become a hit with the country’s youth.

The loss of the CRPF bravehearts has thus had a range of fallouts—from the good and the bad to the ugly.

Under the good category are reactions of India’s public, the current government’s actions mentioned and the responses of many countries. The US condemned the attack, assuring that it would work with India on counter-terrorism efforts and urged Pakistan to stop sheltering terrorists, to cooperate with the investigation and punish those responsible. It also prevailed upon China on blacklisting Azhar. Bangladesh, Bhutan, France, Hungary, Israel, Maldives, Nepal, Russia, Singapore, Sri Lanka, Turkey and the United Arab Emirates condemned the attack, as did the United Nations Secretary-General. Iran’s deputy foreign minister Abbas Araghchi met with India’s External Affairs Minister Sushma Swaraj and referring to both the 2019 Pulwama attack and the 2019 Khash-Zahedan suicide bombing, stated that Iran and India would work together to prevent future attacks. Pakistan’s efforts to fool the world by conducting foreign media to a site well away from the building accurately targeted by IAF failed miserably, after getting exposed by satellite photos and advertisement photos by the makers of the Israeli-developed SPICE-2000 (Smart, Precise Impact, Cost Effective) bombs used by IAF on the JeM centre’s building in Balakot.

The bad fallouts of the attack include Pakistan stepping up ceasefire violations and terrorist attacks in Kashmir. While it can only be hoped that Pakistan does not raise the ante so high that war breaks out, India’s armed forces are taking no chances. Another great danger is Pakistan’s military leaders’ collective delusion syndrome, which was a major factor in causing past wars.

The ugly is ironically all Indian. A gang of Left apologists, spearheaded by the Congress, still smarting from its debilitating defeat in 2014, has been spreading false propaganda about the so-called failure of the IAF’s anti-terror strikes, scoring self-goals, singing the enemy’s tune, and stooping to a new low in terms of electoral politics. There is no stopping them.

A very recent announcement of three strikes by none other than the home minister has indeed come as a surprise. Will there be more?