Documenting the Red and White

A photography exhibition lays bare the parallels between the two revolutionaries, Gandhi and Mao Zedong. 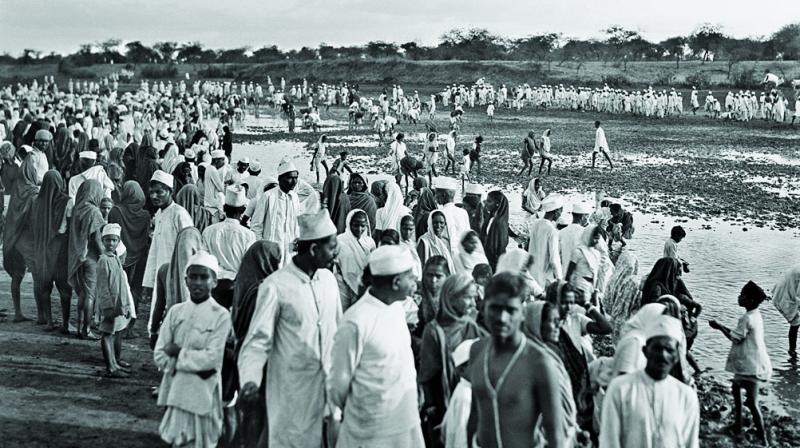 Before Henri Cartier-Bresson and Margaret Bourke-White gave the world the images that form the visual memory of Mahatma Gandhi, a relatively modest Swiss photojournalist Walter Bosshard had travelled 20,000 kilometres by car to capture the iconic Dandi March. A few years later, he found himself in China documenting Mao Zedong and the Red Army. In what were political photography expeditions, unlike the kinds that were seen before, Bosshard not only captured the two very different ideologies but unknowingly also captured the precedent of what led to the two biggest revolutions in Asia, which changed the path of these countries forever. Hence, in a photography exhibition titled Envisioning Asia: Gandhi and Mao in the Photographs of Walter Bosshard at the Dr Bhau Daji Lad Museum, the curators Gayatri Sinha and Peter Pfrunder have carefully laid bare the parallels between the two revolutionaries as seen in Bosshard’s photographs.

Gayatri, an art critic, had visited Peter, Director of Swiss Foundation for Photography, when the latter showed her the archives of Bosshard’s coverage of the Civil Disobedience movement. “I came back but I kept thinking that while we do have a fair amount of Gandhi pictures, what we haven’t seen is Gandhi and Mao through the lens of one photographer in the same decade of the 1930s,” recalls Gayatri who then collaborated with Peter. His team digitally restored the photographs which were printed, framed and exhibited in India.

In March 1930, after receiving an assignment by the Münchner Illustrierte Presse to cover the growing unrest and the Independence movement in India, Bosshard found himself in Saurashtra region following Gandhi, his 78 participants and the thousands of the followers on the Dandi March. But, what really became the jewel in the series, were the photographs he clicked while spending a day with him. “In Gandhi, what Bosshard captures is that when he comes really close to Gandhi, you can see there is only Gandhi’s body filling up the frame and the intimacy of the camera. The camera is very unobtrusive as you can see Gandhi shaving, eating and talking and seated, not like he is seeking to be an iconic figure,” Gayatri explains. Bosshard’s genius also lies in bringing out the salient features of Gandhi’s endeavours by capturing the symbols like suti-charkha and weaving. The pictures emote the non-violent nature of the movement that was gripping the country. 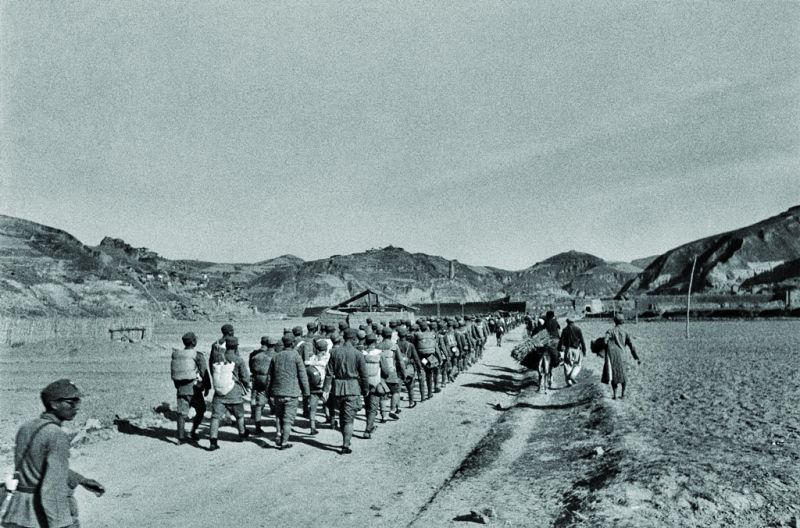 Mao Zedong in front of the entrance to the “Red Academy”, Marching soldiers of the 8th Route Army,Yan'an, 1938.

Whereas, the photos of Mao and the Red Army lack that intimacy, but are testament to the silence before the storm of violent revolutionary movement. From military uniform-clad Mao, to the soldiers marching, the symbols of the Maoist movement were somehow humanised by the photojournalist.

Although, it is the parallel between the two sets of pictures that gripped Gayatri. “Even though historically it’s called Dandi March, it was hardly like a march. It was very simple village community kind of ethos that was building up, and then you have the march of Mao’s Red Army and the way he is training his parent army to become a challenge to the Japanese forces as well as the nationalistic army led by Chiang Kai-shek. This was interesting that there are two marches, but ideologically so different. While one is peaceable, wearing white — the colour of enunciation, the other is wearing old military uniforms and is a sight of coming together of a fight,” explains Gayatri.

While Gandhi’s civil disobedience movement inspired Nelson Mandela and other aspiring colonised countries to fight colonialism, Mao’s movement influenced Cambodia, Vietnam and affected Taiwan. Hence, in effect, Bosshard unknowingly captured the pivotal moments that changed the political and social history of the whole continent. “I have called it Envisioning Asia because the spread of these two ideologies are very profound and powerful and they are studied in contrast far beyond borders. So, it made sense to have them. Interestingly, we put them in two separate sections so that you can actually see them in two parallel, though not converging but diverging ideologies,” she concludes.

Envisioning Asia: Gandhi and Mao in the Photographs of Walter Bosshard can be viewed at Dr Bhau Daji Lad Museum till March 24.