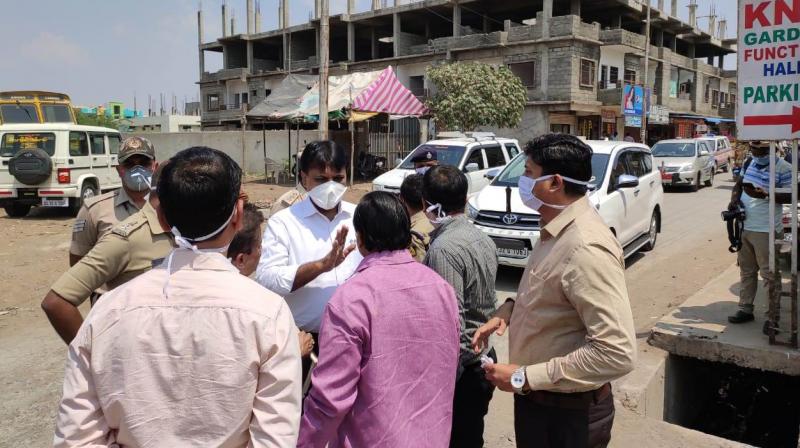 Health and police staff are enforcing a containment zone around the house of a 76-year-old man who tested positive for the coronavirus after his death in Kalaburagi, Karnataka. tion of ward 30 in Kalaburagi City on Friday.

Kalaburagi: A day after Mohammad Siddiqui of Kalaburagi became the first Indian to die of a coronavirus infection, his house in this city has been cordoned off, and officials have declared ward number 30 of the Gulbarga City Corporation as a containment zone.

An area within a 5 km radius of the man’s house has been declared a buffer zone and the district administration has set up check-posts at several locations. The check-posts in ward number 30 are being manned by health, police and city corporation personnel.

Mohammad Siddiqui, a 76-year-old man described as a religious leader in the community, died of lung complications on Tuesday after having been taken to Hyderabad for treatment. Tests on his blood samples, the reports of which were received after his death, showed him to have been coronavirus positive.

The death of the man has spurred the Karnataka government to order a shutdown of all public gatherings across the state.

The centre of Karnataka’s concerns happens to be the area around Mohammed Siddiqui’s house here and all the people he came into contact in the community and in the several hospitals he was taken to for treatment.

A senior official in Kalaburagi told Deccan Chronicle that persons from within the containment zone will be asked to justify any travel outside, and advised to avoid it. If any of them have symptoms such as flu, cough and cold, they will be referred to a hospital.

The official also said people coming to the community wall also be advised not to visit. Visitors will be let in only in case of an emergency situation, or else turned away.