PSA against Farooq Abdullah revoked, to be released soon

Abdullah was under preventive detention since August 5 last year, the day Centre abrogated the special status of Jammu and Kashmir 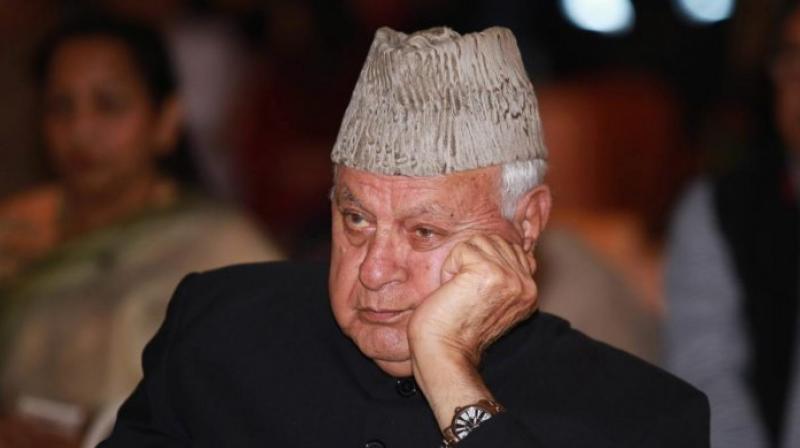 Srinagar: The Jammu and Kashmir administration on Friday revoked the stringent Public Safety Act (PSA) against former chief minister Farooq Abdullah, a five-time parliamentarian and a member of the present Lok Sabha, with immediate effect.

According to an order issued by the Union Territory's home secretary Shaleen Kabra, the PSA ordered by the district magistrate of Srinagar on September 15 and subsequently extended for three months on December 13, stands revoked.

Abdullah was under preventive detention since August 5 last year, the day the Centre abrogated the special status of Jammu and Kashmir. He was the first chief minister against whom the PSA was invoked.

The stringent Act was slapped against him on September 15, hours before the Supreme Court was to hear a petition by MDMK leader Vaiko who claimed that Abdullah had been illegally detained.

He was booked under 'public order' of the PSA, a provision that allows authorities to detain a person for three months without trial. This can be extended up to two years.

The decision to release the National Conference patron came hours ahead of the ending of the three-month period on Friday midnight.

Immediately after his release, the National Conference issued a statement welcoming the decision and also urged the Union Territory administration to release other political leaders including party vice president and former chief minister Omar Abdullah.

According to the NC statement, the release of its patron from detention was the right step towards restoration of a genuine political process in Jammu and Kashmir.

It said the process would receive further fillip when party vice-president Omar Abdullah and other political detainees are set free. “We urge the government to do so at the earliest,” it said.

“As the pre-eminent political party of Jammu and Kashmir, the National Conference has played a key role in strengthening the voice of the people through democracy and will continue to do so,” the statement said.

Officials said District Magistrate Shahid Iqbal Choudhary entered the residence of Abdullah, who underwent an eye surgery earlier this week, and is believed to have handed over the release order to him.

Farooq Abdullah's son Omar as well as former chief minister Mehbooba Mufti were slapped with the PSA on February 6, the day on which their six-month term of preventive detention was to end.