Victim said she was raped when she had visited BJP MLA's house after he offered her 'job opportunity'. 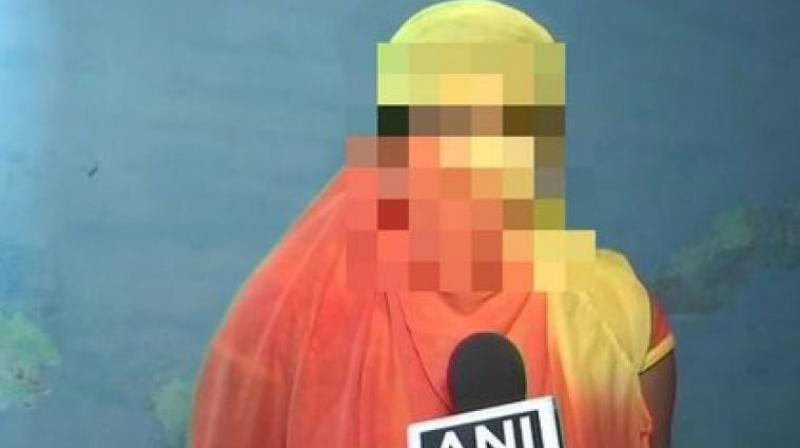 17-year-old Unnao rape victim said she was told that her father and family would be killed if she opened her mouth. She claimed that they gangraped her for a few days and sold her to someone from whom she was recovered. (Photo: ANI)

Unnao: Families of the 17-year-old Unnao rape victim and the accused BJP MLA Kuldeep Singh Sengar were neighbours in Makhi village and the girl and her sibilings used to address Sengar as "bhaiya" (elder brother), The Indian Express report said.

Families of the rape victim and Kuldeep Singh Sengar once enjoyed "cordial relations" until June 2017, when the girl visited the MLA’s house with a relative after he offered her a “job opportunity”.

In an interview to The Indian Express, the rape victim spoke about the link between the two families and the sequence of events that led to her alleged rape last year.

“It was June 4 last year (2017). I was asked to go inside a room, where he raped me. Later, I was told that my father and family would be killed if I opened my mouth. I did not speak about it to anyone until I was kidnapped by some of his people a few days later, on June 11.”

According to the 17-year-old victim, she was then gangraped again for a few days and was sold to someone from whom she was recovered.

On Thursday, police registered an FIR against BJP MLA Kuldeep Singh Sengar in connection with the alleged gangrape after the UP government decided to hand over the probe to the CBI. Police charged Sengar under various sections of the IPC and provisions of the Prevention of Children from Sexual Offences (POCSO) Act.

“Hum sab unhen Bhaiyya kehte the. Humare bade papa unke sath the. Kabhi-Kabhi woh (MLA) ghar aate the aur daadi se kehte the ki anda fry karke khilao, toh daadi unhe banake khilati thi (All of us used to call him brother. The elder brother of my father was with him. Sometimes, the MLA used to come home and ask my grandmother to prepare egg fry for him, and she used to do it),” said the victim.

According to the victim, as soon as she returned home after the alleged gangrape last year, she was shifted to Delhi where her uncle lives. “It was at their home in Delhi that I first shared details of the entire incident with my aunt, who then informed my uncle,” said the victim.

“On August 17, 2017, my uncle and I went to Lucknow and submitted an application to Chief Minister Yogi Adityanath at his residence. He gave it to some others standing with him but nothing happened. Neither me nor my father could come back to the village,” said the rape victim, adding that she dropped out of school after Class VI about five years ago, “like other girls due to constant harassment by local boys”.

“When nothing happened even after meeting the Chief Minister personally, I wrote applications to the President, the Prime Minister, the UP DGP, seeking help. But nothing happened, I was instead advised by policemen to leave the MLA out of it,” the 17-year-old claimed.

The rape victim went on to add that when she heard about her father being beaten up last week, she decided to take the next train to Lucknow to meet Chief Minister Yogi Adityanath again.

“Those at the gate said he was not there. We requested to meet his subordinates but they refused. I felt that I was the cause of all the trouble for the entire family and had brought kerosene with me. I took it out and poured it on myself. But instead of me, my father was killed,” she said, with tears rolling down her eyes.

Today, the victim's entire family - she, her three sisters, five-year-old brother, mother, grandmother, uncle and aunt — is staying in hotel rooms provided by the district administration in Unnao.

According to the grandmother, who is TB-stricken, the father of the victim had stayed away from the village until last week when he just came to “deliver medicines”.

“I am to be blamed for his death as he had come to the village just to give me medicines. He also wanted to meet his son. They held him by his feet and dragged him out of my house in front of my eyes. We had closed the door but they jumped in… I will never go there again,” said the 65-year-old.

“Mere papa ko khub mara… pani dal-dal ke maar rahe they neem ke ped se bandhke… koi nahin bola… daadi toh wahin behosh ho gayi thi… hum wahan wapas nahin jayenge (My father was beaten badly… they were pouring water on him while beating him after tying him to a neem tree… no one said anything…. my grandmother fainted right there… we won’t go back),” said the 11-year-old sister of the rape victim.

“When they could pick up the male member of our family from our house in front of the entire village and beat him publicly with their guns and cane sticks, you can imagine our plight. How can we be secure now? They can pick any one of us at night and our bodies would not be found,” said the victim’s mother.

She said the family’s male members and two elder daughters, including the rape victim, did not return to the village even during festivals.

The rape victim, meanwhile, is clear that she will continue her fight for justice.

“Usne kaha tha ki agar bologi kisi ko toh tumhare papa ko aur parivar ko khatam kar denge. Usne kar diya aur abhi bhi muskurake ghoom raha hai (He had told me that if I confide in anyone, he would finish my papa and family. He has done it and is now moving around with a smile),” she said.

“Jaan de denge, wapas nahin jayenge… lekin ladai ladenge. FIR se kya hota hai, un sabki giraftari honi chahiye (I will give up my life, I won’t go back… but I won’t stop fighting. What happens with an FIR? They should all be arrested).”