India   All India  13 May 2017  Next expose will jolt people of Delhi: Kapil Mishra
India, All India

Next expose will jolt people of Delhi: Kapil Mishra

Mishra visited Raj Ghat, the memorial for Mahatma Gandhi, where he had made startling allegations of corruption against Kejriwal on Sunday. 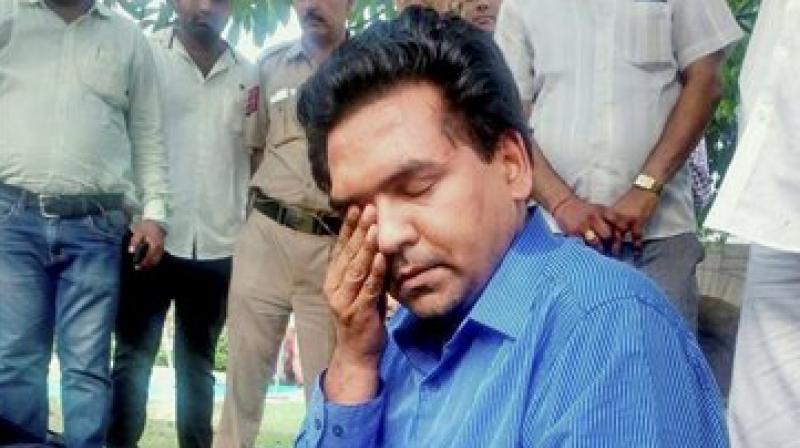 Sacked AAP MLA Kapil Mishra breaks down during his visit at Rajghat as he continues his hunger strike on the third day in New Delhi on Friday. (Photo: PTI)

New Delhi: Axed Delhi minister Kapil Mishra, who is on an indefinite fast, today claimed his next 'expose' will rattle the people of Delhi who 'trusted the Aam Aadmi Party'.

During the day, Mishra visited the Raj Ghat, the memorial for Mahatma Gandhi, where he had made startling allegations of corruption against Kejriwal on Sunday. He broke down at the memorial.

He has been sitting on an indefinite strike since Wednesday and was advised hospitalisation be a team of doctors today.

"His blood sugar level has dropped to 81 mg/dL and intravenous fluids need to be started immediately. His pulse is low. He is going into dehydration because of poor salt intake. We have thus advised hospitalisation," said Dr Javed.

Salam of the Aruna Asaf Ali Hospital who examined Mishra. He is demanding that the AAP divulge details of foreign tours undertaken by five leaders of the party.

"I am feeling very lonely, so paid a visit to the Raj Ghat. Tomorrow, I will visit a Hanuman temple. I will reveal the next batch of expose on Sunday. After that, the people of Delhi will receive a jolt, especially those who trusted the AAP," he said.

His mother Annapurna, a former BJP mayor, wrote a letter to Arvind Kejriwal, accusing him of spreading 'lies' that the BJP was behind her son's stinging attacks on him and the AAP.

Yesterday, several AAP leaders had tweeted a picture in which Delhi BJP chief Manoj Tiwari and Mishra were seen in one frame.

She claimed the picture was clicked at an event to felicitate AAP leader Kumar Vishwas' father and was attended by Kejriwal and all his ministers.