India   All India  13 May 2018  Yogi Adityanath receives bus flagged off by PM at Janakpur
India, All India

Yogi Adityanath receives bus flagged off by PM at Janakpur

The bus, which is also known as Nepal-India Friendship bus, is aimed at increasing tourism between the two countries. 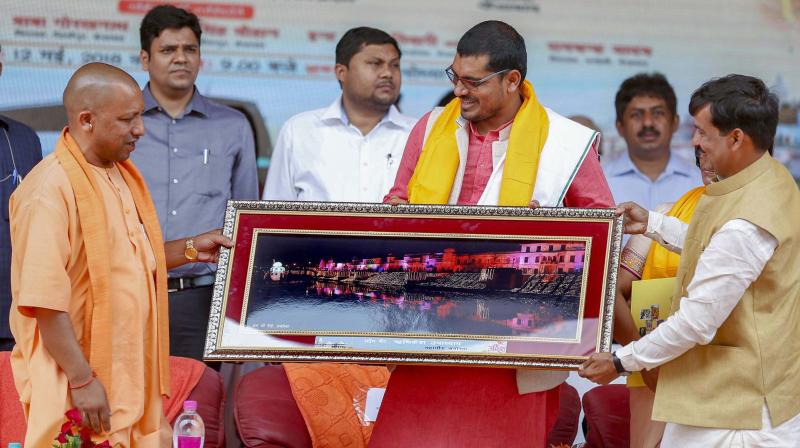 Lucknow: UP chief minister Yogi Adityanath, on Saturday, welcomed the first Janakpur to Ayodhya bus as it arrived in Ayodhya at the Ram Katha Park.

The bus had been flagged off on its maiden journey jointly by Prime Minister Narendra Modi and hjsi Nepali counterpart K P Sharma Oli in Janakpur in Nepal as part of the Ramayana circuit bus service on Friday.

The bus, which is also known as Nepal-India Friendship bus, is aimed at increasing tourism between the two countries. It will link the birthplace of Lord Ram with the birthplace of Goddess Sita. The bus entered from Gorakhpur and travelled along the Sant Kabir Nagar highway where it was received by district and police officials and escorted to Ayodhya.

Speaking on the occasion, the chief minister said that relations between Ayodhya and Janakpur dated back to several centuries and the Ramayana circuit would not be complete without these two cities. “The bus service has been started on the initiate to Prime Minister Narendra Modi and will further cement the relationship between India and Nepal,” UP CM said.

“India and Nepal share cultural and social similarities. King Dashrath and King Janak (father of Sita) shared a strong bond. The Indian government has decided to bring Ayodhya and Janakpur closer by completing the Ram-Janki Marg which will reduce the travelling time between the two cities from the existing 10 hours to about six hours”, he said.

Mr Adityanath said that his government had already set aside `133 crores for the development of Ayodhya and said that the Diwali celebrations last year, were only a beginning in this direction.