63.48 per cent turnout in 6th phase as violence erupts again in Bengal 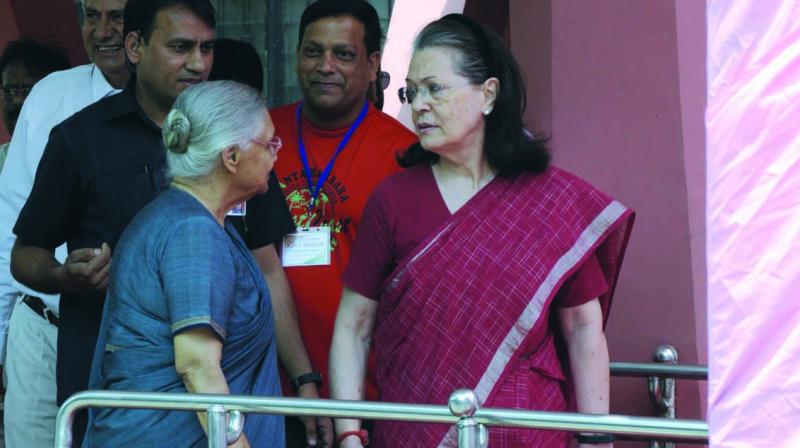 New Delhi: In a repeat of earlier polling rounds, violence once again erupted in West Bengal on Sunday as BJP candidate Bharati Ghosh was attacked and bombs were hurled, while an election officer was allegedly beaten up by an MLA of the saffron party in Uttar Pradesh during the Lok Sabha poll’s sixth and penultimate phase on Sunday in which 63.48 per cent turnout was recorded in 59 seats across seven states. EVM glitches were also reported from a number of states.

The national capital where election was held on all seven seats recorded 61 per cent polling, down from 65.10 in 2014. Votes in Delhi were cast by a number of public figures, including President Ram Nath Kovind, Congress chief Rahul Gandhi, UPA chairperson Sonia Gandhi, chief minister Arvind Kejriwal and external affairs Minister Sushma Swaraj.

After casting his vote, Mr Gandhi told reporters, “Narendra Modi used hatred in the campaign and we used love and I am confident love will win.”

Of the seven states which went to polls on Sunday, the highest polling percentage of 80.13 was recorded in eight seats in West Bengal. The lowest turnout of 54.12 per cent was recorded in 14 seats in Uttar Pradesh.

On Sunday, elections were held in 14 seats in Uttar Pradesh, 10 seats in Haryana, eight constituencies each in Bihar, Madhya Pradesh and West Bengal, four in Jharkhand and seven seats in Delhi.

While Bihar recorded a polling percentage of 59.38 per cent, in Haryana it was 66.30 per cent, Madhya Pradesh 60.12 per cent and Jharkhand 65.17 per cent, according to the Election Commission.

In 2014, the BJP had won 45 of the 59 seats which went to polls on Sunday. The Trinamul Congress had won eight, the Congress two and the Samajwadi Party (SP) and the Lok Janshakti Party (LJP) one each.

In a message earlier in the day, Prime Minister Narendra Modi asked the youth to vote in record numbers. “Yet another phase of the 2019 Lok Sabha elections is here! Urging all those whose constituencies are polling in today’s sixth phase to go out and vote,” he tweeted.

In West Bengal, which saw minor skirmishes, BJP candidate from Ghatal, Bharati Ghosh, alleged that she was attacked by Trinamul supporters.

The former IPS officer alleged she was attacked twice by local people when she tried to visit polling stations in her constituency. Ms Ghosh suffered minor injuries when a group of women allegedly attacked her when she tried to take a BJP agent inside a polling booth at Keshpur area, officials said.

Following this, bombs were hurled and stones were pelted towards her convoy when she was going to visit another booth at Dogachia in Keshpur after receiving complaints of rigging there. One of her security guards was injured and a vehicle was damaged, they said.

“I am the candidate. I am being pushed around and heckled. Those assaulting me and preventing my polling agent to enter the booth should be arrested,” she claimed.

Hours before the sixth phase of Lok Sabha Elections in West Bengal a BJP worker and a Trinamul Congress worker were found murdered in two separate districts which went to the polls on Sunday.

The BJP worker: Ramen Singh (42) was a resident of Jhargram while the Trinamul worker Sudhakar Maity (55) was from East Midnapore.

During voting in Uttar Pradesh’s Badohi, BJP MLA Dinanath Bhaskar and four others allegedly beat up a presiding officer in the Aurai Assembly segment, accusing the official of deliberately slowing the polling process. Poll officials have sought a report on the matter.

SP president Akhilesh Yadav and Union minister Maneka Gandhi are in the fray in the state that sends 80 members to Lok Sabha.

Maneka Gandhi and her rival BSP candidate Chandra Bhadra Singh had a face-off in Sultanpur, with the BJP leader warning him that hooliganism will not work. Mr Singh dismissed her charge.

In Uttar Pradesh, the battlefield has now moved eastward, with constituencies such as Sultanpur, Pratapgarh, Allahabad, Ambedkarnagar, Azamgarh, and Jaunpur voting on Sunday.

Of the 14 seats, the BJP had won all in 2014, barring Azamgarh, which was won by Samajwadi Party (SP) patriarch Mulayam Singh Yadav. This time, his son and party chief chief Akhilesh Yadav is contesting from here.

In Bihar’s Sheohar Lok Sabha constituency, a polling officer was killed at a booth in a freak incident of firing by a home guard before polling started.

A few incidents of malfunctioning of EVMs were reported from various booths, officials said. Bihar has already voted for 24 seats out of 40 in the previous five phases.

Stakes are high for the BJP in Bihar, as out of the eight seats going to polls in the sixth phase, the party had won seven while its alliance partner, the Lok Janshakti Party (LJP), had won one.

Vaishali and Purvi Champaran have the maximum number of candidates in a seat, 22 each. While Ram Vilas Paswan’s LJP had won Vaishali in 2014, the BJP had won the rest, including Paschim Champaran, Siwan, and Maharajganj among others.

In Haryana, the ruling BJP had won seven of the total 10 Lok Sabha seats in 2014, the Indian National Lok Dal (INLD) won three, while the Congress won two.

In Madhya Pradesh, the BJP is fighting to retain seven of the eight seats which went to polling on Sunday. In Bhopal, Congress veteran Digvijay Singh was locked in a battle with BJP candidate and 2008 Malegaon blast accused Pragya Singh Thakur.

In 2014, the BJP had won all these seats except Guna that was won by Congress general secretary Jyotiraditya Scindia. The saffron party won 27 of the 29 seats in the state. However, the December Assembly elections put the Congress back in power after 15 years.