India   All India  13 May 2020  Corona cases spurt as workers return to heartland states
India, All India

UP, Bihar and Odisha are in the line of fire amid the migrant crisis. 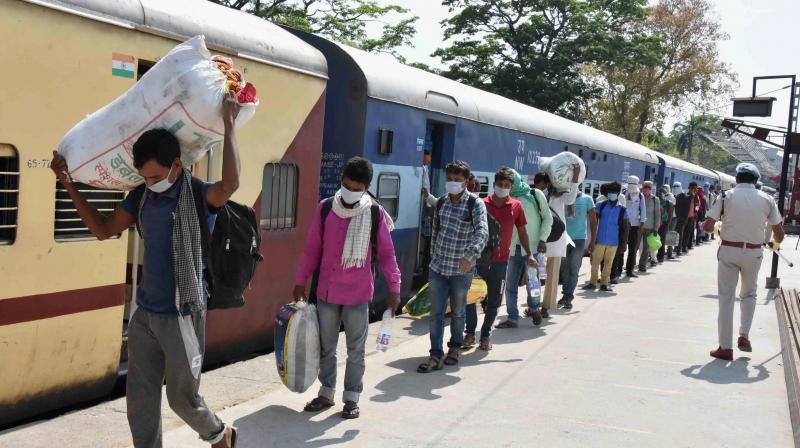 As migrant worker movement gathered momentum, there were signs Wednesday that this is fuelling the coronavirus pandemic in some states. Odisha, Bihar and Uttar Pradesh have already begun to report spurts in their infection numbers as thousands of workers return home from corona hotspots like Mumbai, Chennai, Indore, Surat etc.

Curiously, Odisha, Bihar and Uttar Pradesh have had comparatively lesser number of positive cases, in proportion to their total population, so far.

Odisha has recorded 538 positive cases till Wednesday, recording a rise of 101 cases in single day. Just five of the 21 coronavirus-affected districts account for 84 per cent of the total cases in the state.

Ganjam district is a case that needs a special mention. With no positive cases until May 2, the district suddenly became an epicenter after migrant labourers began returning from Gujarat. Now, it leads the tally with 210 cases.

Bihar, with a population of over 10 crore, has only recorded 908 cases so far. The death toll stands at 7, with one cancer patient succumbing to coronavirus on Wednesday.

However, the state also recorded its highest jump in coronavirus cases on Tuesday after 130 people tested positive for the virus. At least 124 of them were migrant labourers, who came from high risk red zones in states like Gujarat and Maharashtra.

Wary of the limited testing capacity and the influx of lakhs of migrants in the coming days, the Nitish Kumar government on Wednesday asked the health department to ramp up testing. As per media reports, the state government seeks to improve the testing rate from 1,800 to 10,000 per day.

Uttar Pradesh is the worst affected among the three states. With a population of nearly 23 crores, which is more than the population of most independent countries in the world, Uttar Pradesh has recorded 3,728 positive cases up to Wednesday. At least 82 people have died of the virus so far.

However, with the migrants returning, the state has also witnessed a spike in its numbers. Since May 3, over 1,300 people have contracted the virus, with migrant labourers being the vector. Co-incidentally, the first migrant train reached Uttar Pradesh on May 3.

As per one media report, the influx of migrants has raised the alarm bells in the state administration. "The virus has spread to the districts previously unaffected by the virus, after the return of the migrant workers," a publication quoted a state official as saying.

Even as the human tragedy unfolds across the country, states have already begun worrying about the state of their economy.

In his characteristic style, Shiv Sena MP Sanjay Raut on Wednesday demanded a special package for Mumbai which has become a coronavirus hotspot. "Workers are leaving as they have no work here. Mumbai's importance as the country's financial capital should be sustained," Raut said.

Raut is not the first politician to seek help from the Centre. Recently, Chhattisgarh CM Bhupesh Baghel wrote to the Prime Minister seeking a Rs 30,000 crore financial package for the mineral-rich state.

"If Rs 30,000 crore for the upcoming three months is not approved, it will lead to an economic crisis in the state, thereby, affecting the operations of normal business," the letter read.

Moreover, the Baghel government has now lowered expenditure limits in various departments due to decrease in revenue due to the pandemic-induced shutdown. As per one report, the departments will now only be able to spend 70 per cent of their allocated budgets.