The AAP leaders, including Kejriwal, are demanding that Baijal direct IAS officers to end their 'strike'. 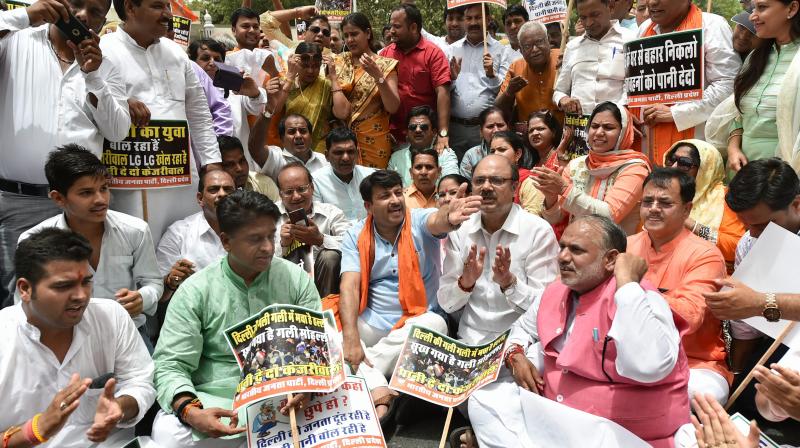 Deputy Chief Minister Manish Sisodia on Wednesday joined Health Minister Satyendar Jain on the third day of his indefinite hunger strike at L-G Anil Baijal's office, where the AAP leaders have been camping for two nights.

The AAP leaders, including Kejriwal, are demanding that Baijal direct IAS officers to end their "strike". They also want him to approve the proposal for door-step delivery of rations.

The leader of opposition in the Delhi assembly, Vijender Gupta, and lawmaker Manjinder Singh Sirsa said the sit-in will continue till their demands are met by the AAP government.

"Until the chief minister assures to provide water to the people, we will continue our sit in," Gupta said.

The protest is against the "non-performance" of the Kejriwal government, he said.

Gupta said BJP legislators had tried to raise the water shortage issue in the assembly but they were marshalled out. The Chief Minister does not come to his office, where would people go to raise their problems, he said.

"We have called on people to reach the CM office to raise problem of water supply," Gupta said.

Sirsa said the sit-in will continue until Delhi gets adequate water. BJP lawmaker Jagdish Pradhan was also present at the sit-in.

BJP workers led by the party's Delhi unit chief Manoj Tiwari staged a protest at the Delhi Secretariat earlier on Wednesday over issues related to water and electricity supply.