Terming the killing of four BSF personnel in firing by Pakistan Rangers on Tuesday night as 'betrayal', KN Choubey said. 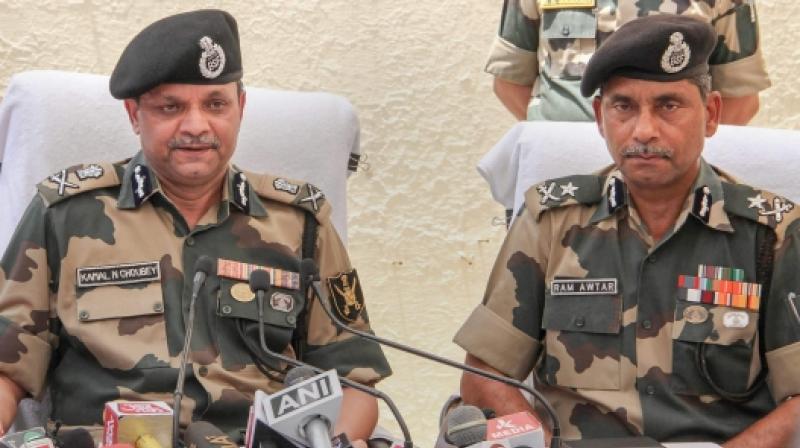 Jammu: Indian forces have maintained the sanctity of the ceasefire along the frontier but Pakistan "unfortunately" has not, a senior BSF official said on Wednesday while emphasising the troops were prepared and border dominance would be maintained.

Terming the killing of four BSF personnel in firing by Pakistan Rangers on Tuesday night as "betrayal", Additional Director General (Western Command) K N Choubey said what the neighbouring country does is its business and but "how we respond" to the attack is "our job".

Choubey also said the BSF would lodge a protest with the Pakistani side over the incident.

Four BSF personnel, including an assistant commandant rank officer, were killed and three others injured in firing by Pakistan Rangers along the International Border in Jammu and Kashmir's Samba district.

The officer, who paid tributes to the four BSF personnel killed, was replying to a question on whether the border guarding force was caught off guard.

Every instrument required to protect the territorial integrity of the border is being maintained regardless of ceasefire or no ceasefire, he said.

Asked about the trust level with regard to Pakistan, which has violated truce agreed at the DGMO level and sector commander-level meetings, the BSF ADG said ceasefire was always a bilateral decision.

There was a meeting between our sector DIG and the counterpart's designated officer and it was decided that there will be a ceasefire.

"We have maintained the sanctity of the ceasefire. Pakistan has not. It has violated it," he said.

Asked whether it was a betrayal by Pakistan, he said it was very "unfortunate" as the ceasefire announcements are to be honoured.

"We have honoured it and Pakistan has not honoured it. And what Pakistan does is Pak's business and how we respond to the betrayal is our job," he added.

Asked whether the deaths of jawans would be avenged, Choubey said "what is going to unfold in our operational preparedness is something that I am not going to share".

"But we will suffice to say that we will maintain the dominance and the territorial integrity," he added.

Asked whether BSF will lodge a protest with Pakistan, he said it would.

To a question about Pakistan's Border Action Team (BAT) carrying out the attack, he said it is too early to come to that conclusion.

"Right now we are only concerned about such a gross violation of ceasefire when the meeting took place on their request. For us the main concern is lack of credibility in the request for ceasefire", he added.