India   All India  13 Jun 2020  Chaos rules supreme in Hyderabad's Gandhi Hospital as bodies pile up at mortuary
India, All India 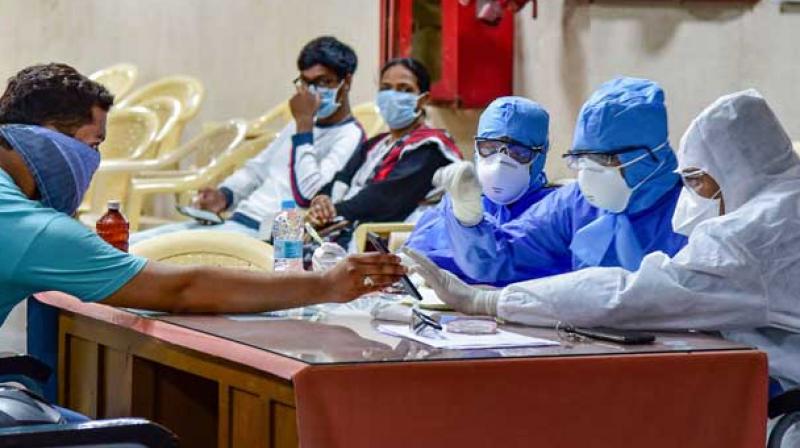 Hyderabad: As fear of the killer virus fills the air, dozens of grieving men and women keep arriving outside the morgue at Gandhi hospital throughout the day to identify the bodies of their loved ones who died due to COVID-19.

Some wait endlessly, others plead or argue with the authorities to release the body quickly. The morgue staff, who too are on the edge, make each person stand at a distance and take a quick peek at the body, either through the transparent patch on the body bag or by slightly unzipping it -- all in a flash. None have the time or patience to go through the label on the bag which mentions the name, age, ward (where he died) and other specifics.

As chaos reigns supreme outside the Gandhi hospital mortuary, the hospital administration is struggling to set things in order at the morgue to avoid goof-ups like the one that happened on Thursday when the morgue staff released the body of a COVID-19 victim to a wrong family -- the second such incident in the recent past.

For the moment, the hospital authorities are mulling pasting a color photograph of the deceased on the body bag to help in easy identification, put up more lights around the mortuary and importantly, limit the time for releasing the body in evening, perhaps till 6.30 p.m. So far, bodies were being released at 10 or 11 pm.

Hospital sources told The Asian Age that the ward boys involved with patient care have been reluctant to deal with the bodies at the mortuary after a few of them tested positive for the virus recently. They were the ones dealing it with regularly. Following this, the staff working under the Health Inspector have been requested to take charge of the morgue, as a temporary arrangement.

''Presently, staff from different departments and even security personnel are being made to work at the mortuary. The responsibility of the team dealing with the funeral start only after the body is placed in the ambulance,'' they said.

It takes anywhere between four to five hours to shift the body to the mortuary from the ward. After making an entry about the arrival into the morgue, it is packed one by one using disinfectants and other chemicals to arrest the virus from spreading.

Meanwhile, the bodies keep piling up and the rush at the mortuary increases. There is no time specified for release of the body and this leads to chaos throughout the day. If the venue for cremation of two or more deceased happen to be close to each other, then the bodies are released at the same time, which is convenient for body transporters. But this could lead to more waiting time as both bodies would not be ready at the same time.

In Thursday's goof-up, wherein one Rashed Ali Khan's body was mistakenly given to another family, none noticed the label on the body bag, right from the time it was released from the mortuary till the cremation. When the family member who wrongly identified the body was questioned, he said that Rashed resembled his relative, who too had died due to COVID-19.