Monsoon menace: Rail services to be restored in 2 days

Upto 20 track crossovers damaged in deluge, delays to last until repairs are over. 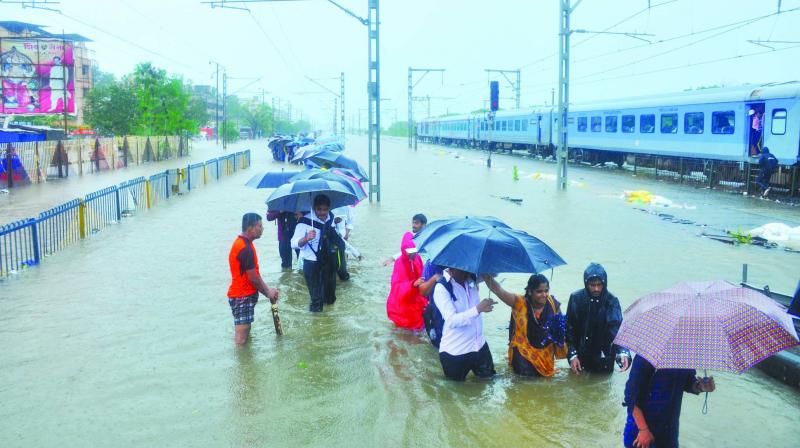 The WR has lost Rs 5 crore due to the cancellation of 54 outstation trains on July 10 and 11.

Mumbai: Due to water-logging on the railway tracks between Vasai and Virar — thanks to the heavy rain that battered the city and adjoining parts from Saturday to Tuesday — close to 20 track crossovers (points where trains change their route) have been damaged.

The damaged track crossovers are likely to be changed in two days but till then, it might cause delays. The WR has lost Rs 5 crore due to the cancellation of 54 outstation trains on July 10 and 11. In the wake of the flooding of tracks at Nalasopara and Virar, the WR is contemplating raising the height of the tracks and construction of walls to the east of Nalasopara. Additionally, the Virar Municipal Corporation (VMC) has proposed construction of two new culverts and the WR has green-lighted the same.

A.K. Gupta, general manager of WR, told select reporters that they are planning to construct a wall at platform number 4 of Nalasopara towards the south and north- end so that the water does not seep onto the tracks, leading to water-logging. The wall will be 50 metres at both ends. However, this is a short-term solution to avoid water-logging of tracks, he said.

“As another step for smooth operation of suburban services during rain, we will raise the tracks keeping in mind the infrastructure constraints imposed by the ROB and FOB as an immediate short-term measure,” Mr Gupta said.

A senior officer of WR, requesting anonymity, said that the height of the tracks would be raised between four to six inches. The task of raising the height will be completed by the end of this year. “If the weather permits, we may raise the height of tracks in the monsoon season itself,” he said.

Meanwhile, Mr Gupta has suggested to the Vasai-Virar municipal corporation (VVMC) officials that the drainages flowing towards the creek under their jurisdiction be widened so that rainwater can pass away easily. Mr Gupta has also requested the Brihanmumbai Muni-cipal Corporation (BMC) to make available to the VVMC de-silting machi-nes so that the drainage system can be cleaned. The WR GM further said that 10 rakes — marooned due to water-logging — will be restored in 10 to 12 days.