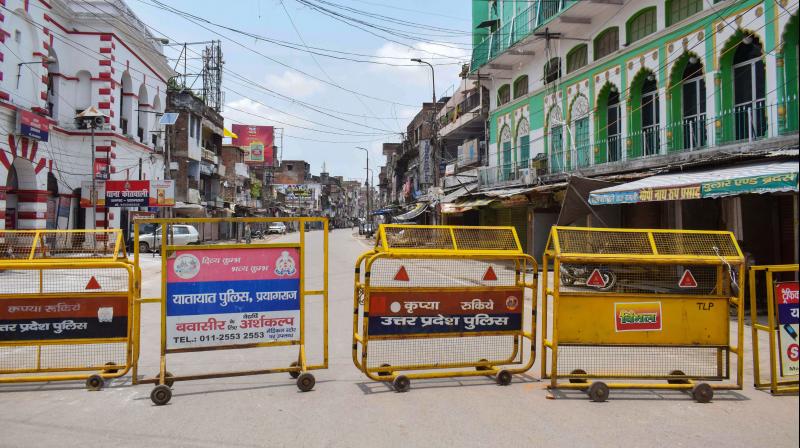 A closed road during the lockdown announced by the state government to curb the spread of virus in Prayagraj. PTI photo

This was the fourth consecutive day that COVID-19 cases in the country have increased by more than 26,000.

Despite the huge number of cases, home minister Amit Shah sounded optimistic, saying India was on a strong pedestal in the fight against Covid-19. The government has indicated Parliament’s monsoon session could be held by September if the situation improves further.

“Today India is leading a successful fight in managing the pandemic in the country. At a time when the health services of even the most developed countries were collapsing under its impact, the whole world was concerned how would India fight this pandemic. But today the most successful fight against this pandemic has been fought in India under the leadership of Prime Minister Narendra Modi,” Mr Shah said.

Several cases related to prominent people in Mumbai were detected on Sunday. Besides superstar Amitabh Bachchan and his son Abhishek, who were found Covid-positive on Saturday, Aishwarya Rai Bachchan and her daughter Aaradhya have also tested positive. All his four bungalows were sealed and all his staff are being tested. Actor Anupam Kher is himself negative but his entire clan, including his mother, tested positive. Actress Rekha’s bungalow was sealed after her guard tested positive; while 18 staffers at Mumbai’s Raj Bhavan were also found to have Covid-19.