The security forces have launched ‘Operation all-out’ against militants across the Kashmir Valley. 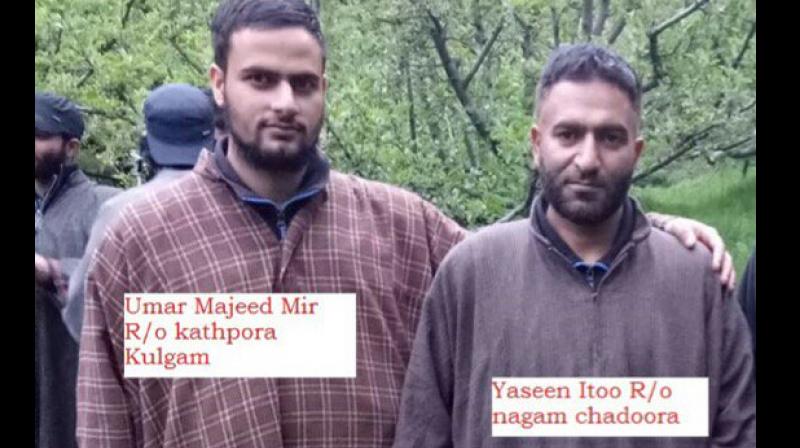 So far in 2017, as many as 136 militants, including six commanders have been ‘neutralised’. (Photo: Twitter/@DigSkr)

Srinagar: Hizbul-Mujahideen commander Muhammad Yasin Itoo, the successor of Burhan Wani, and two other militants were killed in a fierce fire fight in a remote village of southern Shopian district of Jammu and Kashmir overnight, official said on Sunday. Two Army jawans were also martyred in the encounter, while four others were injured.

The security forces have launched ‘Operation all-out’ against militants across the Kashmir Valley. So far in 2017, as many as 136 militants, including six commanders have been ‘neutralised’.

However, about two dozen security personnel too have laid down their lives while fighting militancy, official sources said.

J&K’s Director General of Police Shesh Paul Vaid has said that there would be no let up in the tough campaign and reiterated that the youth who have taken up the gun have been left with only two options now – either to return to their homes or get killed in the counterinsurgency operations.

“During the search operation, militants hiding in the area fired upon the joint search party. The fire was retaliated, triggering an encounter,” the official said.

The two other Hizb militants killed in the clash have been identified as Irfan-ul-Haq and Umar Majeed Mir. Police also said that the Itoo and two others were involved in a number of anti-national and militancy-related activities.

Itoo was one of the longest surviving militants and was considered as the Hizb's top commander in south Kashmir, police sources said.

Two soldiers, who were killed in the encounter, are Sepoy Gawai Sumedh Waman and Sepoy Ilayaraja P, both 25 years old. Waman was a resident of village Lonagra in Akola, Maharashtra and is survived by his parents, one brother and one sister. Ilayaraja was from Kandani village of Sivagangai district in Tamil Nadu and is survived by his parents, wife and sister, defence spokesman Colonel Rajesh Kalia said.

Groups of people had earlier relocated to the encounter site and made repeated attempts to help the holed-up militants to escape the security dragnet, the witnesses and officials said.