Placed in air tight wooden-glass showcase, the flag is surrounded by six bowls of silica gel to regulate humidity, absorb moisture all time. 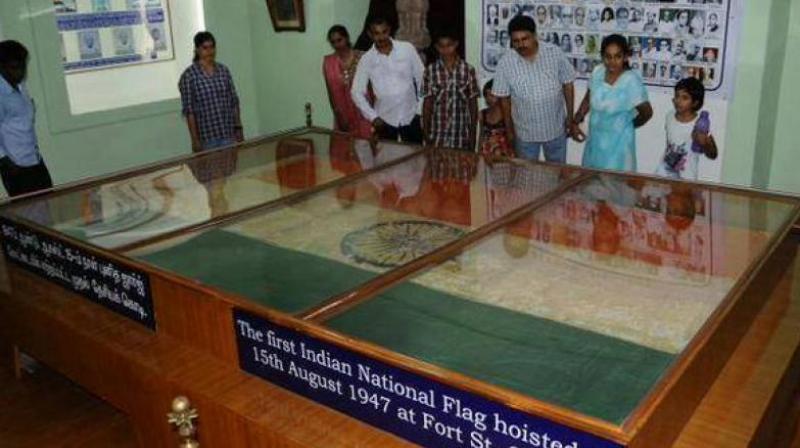 The flag, which has been in the ASI’s ‘reserve collection’ for decades was for the first time put on public display at the Fort Museum. (Photo: Facebook)

Chennai: The only surviving vintage national flag in India, hoisted at Fort St George in Chennai on the first Independence Day on August 15, 1947, is being conserved by the Archaeological Survey of India through multi-pronged efforts.

The flag, which has been in the ASI’s ‘reserve collection’ for decades was for the first time put on public display at the Fort Museum in Fort St George complex in Chennai on January 26, 2013.

Conserving the flag, however, is not an easy task. Placed in an air tight wooden-glass showcase, the flag is surrounded by six bowls of silica gel to regulate humidity and absorb moisture all the time.

A ‘lux meter’ (used to measure light intensity) is used to ensure appropriate lighting inside the hall and over the showcase.

The appropriate temperature is maintained inside the hall by round-the-clock air conditioning.

Human sensor enabled LED lighting is used around the showcase and the lights will turn on only if there are visitors around. “We even do not allow natural light to fall on the showcase,” an official requesting anonymity told PTI, adding that dust and dirt are the other things being taken care of.

“There is also a robust security apparatus in place which includes a trigger siren,” the official added. The 12ft by 8 ft pure silk flag, was hoisted after lowering the British Union Jack on August 15, 1947, at 5.05 am at Fort St George and was witnessed by thousands of people.

“Unfortunately, we do not have records with us to establish who hoisted the flag that day at Fort St George,” the official said. “This is the one and only national flag that has been conserved to this day and it is also the only flag that was hoisted on the first Independence day to survive till now,” the official said.

Asked about some portions of the flag appearing to be in tatters, the official said it was due to age. “We are doing our very best to protect and conserve it since it is our national heritage and pride and there is no similar flag available anywhere else in our country.”