Asked whether Prime Minister Narendra Modi or Union Home Minister Amit Shah are likely to hoist the tricolour at Lal Chowk on August 15. 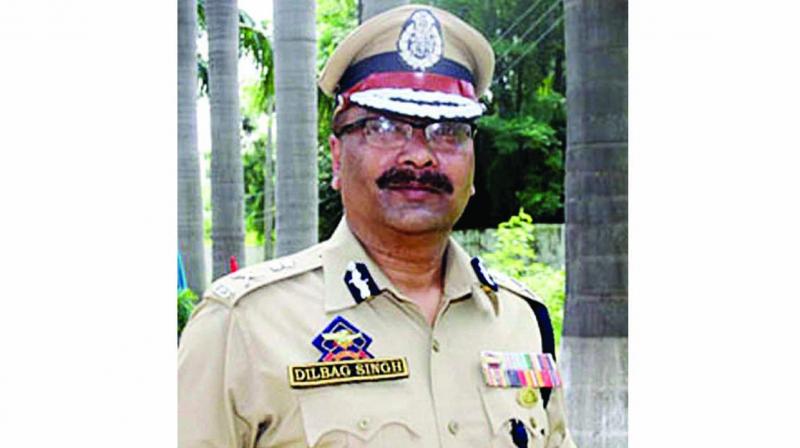 Srinagar: “There are more than the 200-odd terrorists holed up in the Kashmir valley, mostly in South Kashmir currently. It is Pakistan which is much more desperate than the terrorists themselves. Their (terrorists) movement is there and our counter-movement is also there,” says Jammu and Kashmir Director-General of Police Dilbag Singh.

“What is Pakistan Prime Minister Imran Khan hinting at when he says that there could be more Pulwama-like attacks in the valley? Terror threats are the real reason why we have a massive deployment of security forces here,” said Dilbag Singh in an exclusive interview with this newspaper.

“A majority of terrorists are Pakistan nationals and there is desperation. Today, contact with militants was established in Pulwama and a brief firing took place. We thought that it would convert into operation, but could not,” he revealed.

After a tiring and tense day at work, the 1987 batch IPS officer settled down for a lengthy interview with this correspondent at his highly fortified residence, his first media interaction in the last eight days ever since the Centre abrogated provisions of Article 370 and bifurcated Jammu and Kashmir, and made them Union terroritories.

As his phone rings endlessly and he greets ‘Id mubarak’ to all his officers, the IPS officer who is at the helm of the most challenging period of his career in Jammu and Kashmir, says that the next challenges are on August 14 and August 15, the Independence day of Pakistan and India respectively.

“These are sensitive days for us and precautionary measures for both days will be more than routine. We hope it passes of peacefully just like today (Id),” he says with a rare smile of over a week.

Asked whether Prime Minister Narendra Modi or Union Home Minister Amit Shah are likely to hoist the tricolour at Lal Chowk on August 15, as is being anticipated, the police chief said that there was no information available with him on this front. Excerpts of an exclusive conversation.

Q. Leave alone hardened elements like terrorists and stone pelters, even an average Kashmiri is angry with the Centre’s move on abrogating Article 370?

A. It might be because people are unable to understand the implications, or be able to see the positive side of the move. There are many positive aspects to this and once they fully understand them, things would be different. They are slowly beginning to understand it. But there are elements who want to provoke them and use their emotions to their advantage.

Q. Is there an anticipation of a terror strike as militants are desperate to strike?

A. There are 200-odd militants active in the Valley at the moment. But more than the militants who are here, it is Pakistan which is desperate and wants something to happen. There are Pakistani nationals among them who are working in organisations like Jaish-e-Muhammed (JeM) and Lashkar-e-tayyaba (LeT). The Pakistan PM is hinting at Pulwama type of attack. What is he hinting at? We are taking all precautions and that is why there is massive deployment.

Q. How do you describe the prevailing situation today, eight days since the Centre’s move?

A. If you compare the situation today with that of 2016 when terrorist-commander of Hizbul Mujahideen Burhan Wani was neutralised by security forces and a wave of violence that followed, the present situation is far better. Back then, there were many casualties, which was very painful. In 2017, we witnessed an upward trend in militancy. Many locals joined militant groups and Pakistan further sent foreign terrorists. The number of local and foreign terrorists was at an all time high in the last decade. But in the last one year, several targeted operations have taken place on specific information. Foreign terrorists working for JeM and LeT were eliminated. Outfits like Al Badr and ISJK (Zakir Musa module) was completely decimated while Al Jihad was nowhere to be seen. The collateral damage was zero. With huge damages suffered by the terror groups, the graph of militancy came down drastically. This has been the situation from the second half of 2018 and so far in 2019.

Q. What about stone pelting incidents?

A. Earlier on a single day, there used to be dozens of stone pelting incidents. and the atmosphere used to remain tense throughout the week. Stone pelting is at an all time low since last one year and people have started having faith in the security forces. Earlier, both stone pelting and terror attacks used to go on simultaneously.

Q. How has the valley been in the last eight days?

A. In the last eight days, there has been one incident of minor stone pelting in downtown and BBC picked it up, and indulged in false propaganda, which is motivated, unethical and bad. Even in this tense situation, are you witnessing any violence in the Valley? We are facilitating people to use our phones and they are supporting. People have been cooperating with us. There is no mood for confrontation. There could be anger against any decision but no anger against any of the security forces, which is very clear and evident. People are passing on information to us, which is coming handy in operations.

Q. But in SHMS lot of youngsters who are suffering pellet injuries are being admitted which means there is escalation in stone pelting?

A. It is false. Earlier, pellet guns used to be fired at 100 different places in the valley. Now, one stray incident takes place and it gets publicised. Last year on Id, there were 29 incidents that took place. Today, only two minor incidents have taken place.