When Grylls asked whether he ever dreamt of becoming a Prime Minister, Modi said his focus has always been the development of the nation. 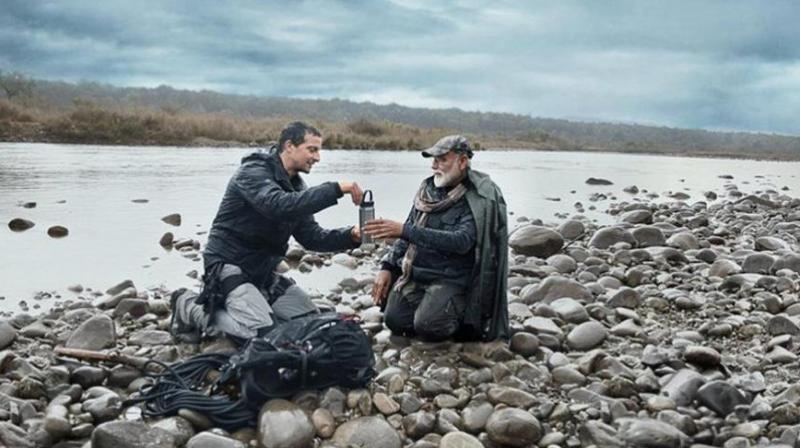 Modi said he never had a good answer about nervousness because it was not a part of his experience. (Photo: Bear Grylls | Twitter)

New Delhi: Walking through the wild and taking a ride on a cold river in a makeshift boat were some of the things that Prime Minister Narendra Modi put up with as he teamed up with survivalist Bear Grylls to promote causes close to his heart -- conservation and cleanliness.

In Discovery channel's, "Man Vs Wild with Bear Grylls and Prime Minister Modi", he braved the rain and the cold in the jungles of Jim Corbett National Park, Uttarakhand, and as the host put it, the PM was a "great sport".

Grylls, who has had celebrity guests before on his show, including former American President Barack Obama, asked Modi about his childhood, dreams as the Prime Minister, whether he feared anything in life and if he felt nervous before a political rally.

Modi said he never had a good answer about nervousness because it was not a part of his experience. "My problem is that I have never experienced such fears. I'm unable to explain it to people what nervousness is and how to deal with it because my in-built temperament is very positive. I see positivity in everything. And because of that reason, I am never disappointed."

When Grylls asked whether he ever dreamt of becoming a Prime Minister, Modi said his focus has always been the development of the nation.

"I was the Chief Minister of a state first. I worked as a chief minister for 13 years, which was a new journey for me. Then my country decided I needed to do this job. So I have been doing this for the last five years. But the focus has been always been on one thing and that is development. And I am satisfied with that job. Today, if I consider this time as a vacation, then I must say I am taking a vacation for the first time in 18 years," Modi said.

On being the country's Prime Minister, Grylls asked whether he ever pinched himself.

"It never occurs to me who I am. I am above all this. When I was a chief minister and even now as the prime minister, I only think of my work, my responsibilities. My position never goes to my head," he added.