India   All India  13 Aug 2021  Feel like losing a lion, CJI on Nariman’s retirement
India, All India

Feel like losing a lion, CJI on Nariman’s retirement

There exists a misconception in the minds of people that judges stay in big bungalows, work only from 10 to 4, Chief Justice Ramana said 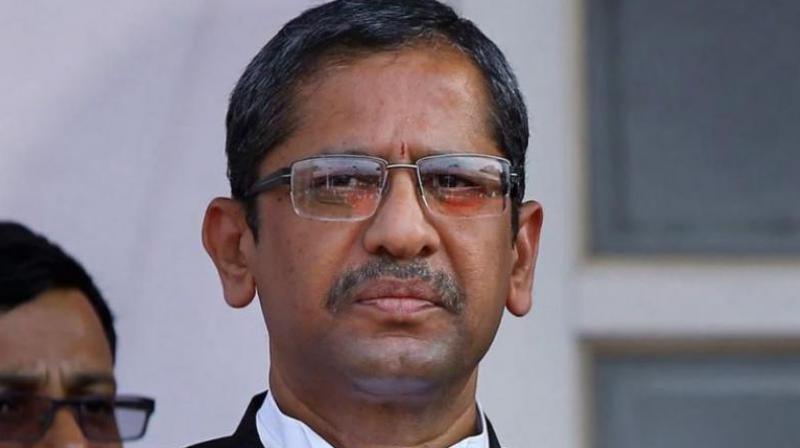 Saying Justice Nariman was a “lion who guarded the judicial institution”, Chief Justice Ramana hailed him for his “erudition, clarity of thought and scholarly approach”. — PTI

New Delhi: The Chief Justice of India, Justice N.V. Ramana, said Thursday judges make a lot of sacrifices, like financial loss, restricted social engagements and working long hours, as he sought to dispel the “misconception” that judges enjoy a comfortable life and work only from 10 am to 4 pm.

“There exists a misconception in the minds of people that judges stay in big bungalows, work only from 10 to 4 and enjoy their holidays,” Chief Justice Ramana said.

Pointing out that such a “narrative is untrue”, Chief Justice Ramana went on to add: “It is not easy to prepare for more than 100 cases every week, listen to novel arguments, do independent research, and author judgments, while also dealing with the various administrative duties of a judge, particularly of a senior judge.”

Underlining that judges work even during court holidays, do research and author pending judgments, CJI Ramana lamented: “Therefore, when false narratives are created about the supposed easy life led by judges, it is difficult to swallow.”

The CJI was speaking at a farewell hosted by the Supreme Court Bar Association for Justice Rohinton Fali Nariman, who retired on Thursday. Saying Justice Nariman was a “lion who guarded the judicial institution”, Chief Justice Ramana hailed him for his “erudition, clarity of thought and scholarly approach”.

“With Brother Nariman’s retirement, I feel I am losing one of the lions that guarded the judicial institution; one of the strong pillars of the contemporary judicial system. He is a man of principles and committed to what is right”, the CJI said in his reference from the ceremonial bench to bid farewell to Justice Nariman.

The CJI, saying judges can’t defend themselves, urged the legal fraternity to counter such “misconceptions” and “false narratives”, adding that for becoming a judge the most obvious sacrifice is monetary, particularly for those who had a roaring practice like Justice Nariman before he became a judge. “One must be moved by a spirit of public duty to take such a decision,” the CJI said.

“We can’t defend ourselves. It is the duty of the Bar to refute these false narratives and to educate the public about the work put in by judges with the limited resources given to them”,  the CJI urged the lawyers.

Referring to the tradition under which a judge distances himself from all social engagements and restricts social interactions, CJI Ramana said he himself believes judges must not completely seclude themselves, as “I think it is important to stay in touch with society and the profession even as a judge”.

At the SCBA farewell, the CJI said: “It is rare to find those who stand by their principles. Brother Nariman is one of them. Our loss will be a huge gain elsewhere. I am sure… that gain will continue to be for the larger public good. I wish him all the best for all his future endeavours.”

Referring to his father -- eminent jurist Fali Nariman -- CJI Ramana said: “It is often said no other plant can flourish under a banyan tree. However, this was not the case when it came to Brother Nariman. He has always charted his own path and excelled in his chosen field, becoming a mighty banyan tree in his own right.”

Justice Nariman, meanwhile, said he was in favour of the induction of Supreme Court judges directly from the Bar. “I believe nobody has a ‘legitimate expectation’ to come to this court. The ‘legitimate expectation’ is of the people of India to get a certain quality of justice in the final court. Merit must predominate, always come first, however, subject to other factors.”

Describing attorney-general K.K. Venugopal as his “lifelong guru” under whom he had started his career as a junior, Justice Nariman said: “God bless the Supreme Court, now and always.” Mr Venugopal said Justice Nariman was ordained as a Parsi priest at the age of 12 and talked of his greatness as a scholar and as a jurist -- referring to his desire to remain a lifetime student irrespective of his stature.